Emmanuel Macron’s trip to Kyiv on June 16, 2022, where he was accompanied by the Romanian President, the German Chancellor and the Italian Prime Minister, seemed to mark a turning point in French foreign policy. But should this be seen as a break? Does France remain in the middle of the road, as some critics claim, who still suspect Paris of seeking a compromise with Russian power, or has it abandoned its illusions of a re-engagement with Moscow, as others analyze?

The trip to Kyiv by the French President, accompanied by three of his EU colleagues, was, judging by the reactions, rather reassuring for our Ukrainian allies. I was also able to observe, speaking that day and the next day before an assembly of European and American politicians and experts in Vilnius, that a less critical view of France, as I had outlined in my two previous papers for Desk Russie, was beginning to emerge. The commitment to support, as President-in-Office of the Council of the European Union, Ukraine’s immediate candidate status for EU membership, the announcement of the delivery of new weapons to Ukraine (including six additional Caesar guns, particularly appreciated by the Ukrainian army, bringing the total to 18) and the repeated condemnation of the barbarity of the Russian regime were rather well received. This was probably even more welcome than the fact that he clarified — as one of his advisers had done earlier — the scope of the traditional formula on the defense of the territorial integrity and sovereignty of Ukraine: this clearly means that the goal is indeed the withdrawal of Russian forces from the whole of the occupied Donbass and Crimea. Finally, the French President made it clear that if one day there were to be negotiations — whatever reservations one may have about the term — they should be held under the terms and at the time decided by Ukraine.

This move was certainly preceded by contradictory signals. Without going back to the repeated comments about humiliation, France’s role as “conciliator” or Vladimir Putin’s “strategic error”, the fact that Emmanuel Macron spoke in Romania of a future marked by negotiations with Russia left the door open to hostile interpretations, even if the president imagined a distant future. In fact, the Ukrainians’ concern is to win the war as quickly as possible in order to spare human lives, and it was unwise to evoke this future, which appeared to be a distraction from the absolute emergency. It was probably not wise either to evoke the possible prospect of a “cease-fire” as an alternative to a victory, admittedly explicitly desired, for Ukraine. The mere mention of such a cease-fire is generally taken as an implicit acceptance of a territorial gain by Moscow.

However, other statements made immediately prior to the cease-fire reflected an assertive desire to counter the threat posed by the Russian regime and revealed a growing awareness of its importance. Thus, inaugurating the Eurosatory exhibition on June 13, he emphasized the need to adapt the military programming law upwards and even went so far as to plead in favor of converting the countries of the European Union to a “war economy”. This would imply, as the Ministry of the Armed Forces is considering, being able to rapidly transform, by means of requisition, as can legally be done in the United States, part of civilian industry for military purposes. Finally, he declared, indirectly pointing out the difficulties of French and European industry to produce enough to support the Ukrainian war effort, that in Ukraine, “the soldiers are asking for quality weapons” and that they were “entitled to have an answer from us”. Such a development is certainly necessary, but there is a high risk that the decision will take too long and come too late. Every day that passes, hundreds more people die on the Ukrainian side. The whole of Ukrainian youth is being mowed down by the criminal war launched by Russia.

Three days earlier, a discussion between some of the president’s advisors and the press showed a more clear-cut and direct position. These advisors spoke of the need for justice for the crimes committed — France has already sent specialized investigators to Ukraine — and, for the first time, the need for Russia to pay war damages. 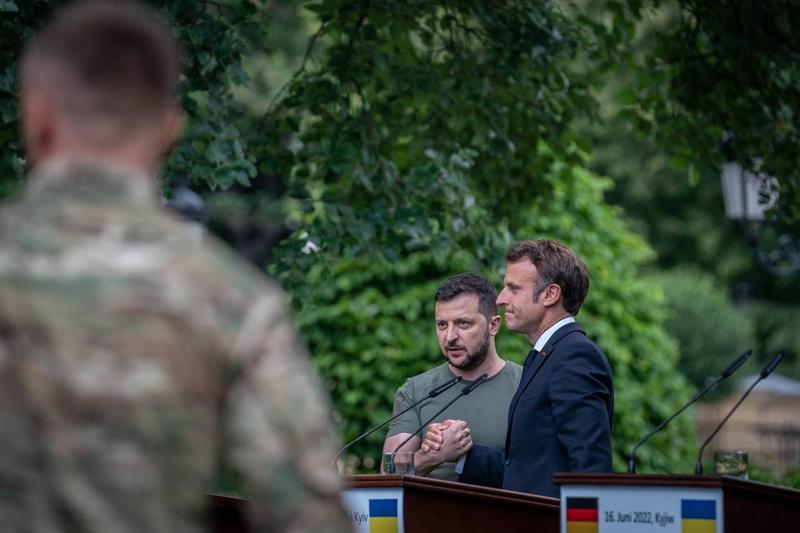 This visit of the French president to Kyiv certainly does not mark a break with the previous position of the president who had already shown his support for Ukraine. Perhaps the psychological dimension was doubly important: on the one hand, by directly seeing certain scenes after the crime, he perceived more immediately the immensity of the crimes committed by the Russian forces, which has most likely already cost the lives of 100,000 Ukrainians, the majority of whom were civilians; on the other hand, with respect to the outside world, the expressions of empathy towards President Volodymyr Zelenskyy were not useless after the obvious lack of understanding in the preceding weeks. Emmanuel Macron has also clearly rejected the idea of a possible territorial compromise with Moscow, even though some continue to lend him the intention. It will certainly take even more to completely remove the suspicion, however unfounded, on the part of certain political leaders in the Nordic countries, Central and Eastern Europe and the United States.

We must certainly hope that the President of the Republic will capitalize on this visit to go even further on at least three points.

First, while Emmanuel Macron had made vibrant speeches at the UN General Assembly on “freedom fighters” (September 2017) and on the “universality of human rights” (September 2018), his practice should be brought more in line with these stated rules, regarding Russia as well as other countries. It would be essential for him to continue to regularly name Russia’s massive war crimes and crimes against humanity in Syria since 2015 and in Ukraine since 2014, without even mentioning the precedent of the second Chechnya War. These crimes alone make it impossible for any leader to sit at the same table with Vladimir Putin as if they had not been committed. The issue of human rights should become an element that feeds into his strategic worldview, including in terms of security. In particular, crime should become more of a consideration in his analysis of the Russian regime. This was a major bias that led him to misunderstand what his methodical destruction of the rule of law meant. The war of destruction and radical elimination of the Ukrainian people should now lead him to reintegrate this dimension into his analysis.

Then, through this trip to Ukraine, which we must hope will be quickly followed by others, he could revise his conception which led him to place himself more willingly on the side of governments than of peoples. The recognition, expressed with empathy, of the courage and commitment of the Ukrainians in the war, will also allow him to renounce an old French prejudice, so present in a part of the political and intellectual class, which establishes an implicit hierarchy between States. In this vision, which is a source of errors in strategic analysis, Russia is part of it but not Ukraine — hence the fact that, during his first term, he only visited it briefly a few days before the outbreak of the new war. In general, it is to be hoped that some of those who were glued to this somewhat condescending view of Ukraine will give up reserving their only deep interest for Russia. The very vision of Russia of these ruling elites should certainly be less focused on classical literature and art as well as on the history of the two centuries preceding the 1917 revolution than on Soviet communism and Putinism. All too often some of these elites have implicitly sided with the empire. This may have rubbed off on the president’s original conception.

Finally, with regard to Russia itself, it is essential that his vision is not governed by a kind of fear of the void, riveted to an archaic conception of a supposed stability. If one intends to look at the future of Russia, one must undoubtedly abandon, even if no one can be naturally confident about Putin’s successors, the consideration of the present status quo as if it were immutable. The victory that we must seek — and for which we must act — in Ukraine, and logically for Ukraine, Europe and the world, will result in a questioning of the balance of power between the powers and of the hierarchy, precisely, of the world order. This can only be favorable to democracies. We cannot therefore fear a radical defeat of Russia and consider, in a conservative way, that it would mean the advent of a “hole” or a zone of instability in the center of Europe.

One can therefore think that this trip to Kyiv should logically lead Emmanuel Macron to renounce these patterns of thought, which are nowadays propagated only by people who have lost all authority, not only moral, but also intellectual. This position could only harm not only his political legacy, but above all France’s position in Europe and in the concert of nations. For France to assert its leadership in Europe, it will have to take the lead in the fight against Putin’s regime. Only by acting firmly for the total liberation of Ukraine will it succeed. Any other way will lead to our own humiliation. In the coming weeks and months we will be able to really judge the fruits of the President’s trip to Kyiv.