The strategic ambiguities of France and Germany and the reiteration of Emmanuel Macron’s unfortunate words on the “humiliation” that the Allies should not inflict to Russia are leading more and more European countries to imagine an alternative path to the EU and NATO on security issues.

After the important conference in Tallinn in mid-May to which we referred in our previous paper, the traditional Global Security Forum (Globsec) was held in Bratislava from June 2 to 4, 2022, with the participation of Marie Mendras, regular author of Desk Russie, and yours truly as speakers on the French side. This year, however, no French official was present, although many presidents, prime ministers, ministers of Central and Eastern European countries as well as of the Western Balkans, Austria and the Nordic countries, and the President of the European Commission had made the trip. In addition to the opening address by President Volodymyr Zelenskyy, Ukraine was also very present at the highest level during the discussions, either physically or remotely.

Although France and Germany were not very visible, they were, as two weeks before in Tallinn, central subjects of discussion. The aim was not only to point out their differences, which were considered incomprehensible, in the understanding of the war in Ukraine, but also to ask how it was possible to get around their position, which was often considered to be an obstacle. One cannot say that it was an obsession: often the different personalities, in open discussions as well as in private exchanges, preferred to define their positions as if they did not exist. Perhaps this was the most striking thing. This is borne out by many of the discussions I have had in recent weeks: the French or German positions either do not make any sense — they are not valued — or they are considered not to matter at all. In the discussions before the Covid-19 crisis and after the August 2019 meeting between Emmanuel Macron and Vladimir Putin in Brégançon, or in the second half of 2021, the topic was rather how to prevent a perceived complacent attitude of France and Germany towards Russia. Here, the feeling was that the majority of European countries, possibly allied with the United States and the United Kingdom, would be strong enough to act without Paris and Berlin. The Russian aggression against Ukraine has finally contributed to changing the center of gravity in Europe by strengthening the implicit alliance of countries that favor an uncompromising attitude.

This European front against positions considered, rightly or wrongly, lenient and inconsistent towards Moscow is taking shape precisely at the moment when France holds the six-month presidency of the Council of the European Union. The war in Ukraine has largely obliterated the achievements of this presidency on other issues (GAFAM, minimum wage, environment, etc.). It is also true that the Russian threat was only allusively and vaguely mentioned in the preparatory text of the French presidency, even though it was the structuring issue on the strategic level. France could have greatly strengthened a broad European unity on this point by changing feet after the rebuff of the European Council of June 2021, where the German project, supported by France and Austria, of a European Union-Russia summit was rejected. It was not too late — and perhaps it is still not too late, since there are still 21 days of the French presidency — for France to take a leading role in the military support of Ukraine in its defense and the reconquest of the territories lost since 2014. A development in this direction, and a decisive support from Paris for a recognition at the June 23-24 European Council of the status of candidate for Ukraine, would certainly allow France to position itself as a unity maker.

If this were not the case, it is France, even more than Germany, that would risk being blamed and could lose its leadership capacity for a long time, at least on strategic issues. This could also have consequences in other areas. Ukraine has become the subject on which supposedly nuanced or half-hearted positions are perceived as unacceptable. The first victim of such an evolution could be the development of a European defense policy, strongly pushed by France, in the framework of what had been misleadingly named “strategic autonomy”. The term had already been strongly criticized a few years ago, but slow progress had nevertheless been made. The general idea — even if its operational and institutional translation remains obscure, to say the least — of the EU’s ability to act alone if the United States is absent had been understood and often approved, especially in the aftermath of the withdrawal of American troops from Afghanistan. But while the real-life test was Ukraine, the line taken by France, which is considered too evasive, risks undermining one of the French president’s flagship projects.

The temptation is therefore emerging for certain countries to forge new forms of security alliances that could include Ukraine, Moldova, or even Georgia — the political situation, however, makes such a development difficult for the latter country. Already, the United Kingdom, Poland and the Baltic states in particular have strengthened their security alliances with Ukraine. Given the division of the EU, but also the relative withdrawal of NATO from the war in Ukraine at the operational level, again due to disagreements between member states — no one expects significant developments at the Madrid summit of 28-30 June 2022 —, some countries are considering specific initiatives which, without destroying existing organizations, would make it possible to bring together countries that are more determined in their response to Russian aggression. Of course, it is too early to discern what pattern they might follow and to predict their chances of success, but the very fact that they have been mentioned is at least a sign. It is certainly not accidental that the United Kingdom seems very keen on this theme: it may be tempting for the British Prime Minister to lean in this direction in order to make people forget the disaster of the Brexit, rehabilitated in the colors of “Global Britain” and the internal scandals, and to reinforce his distance with the EU.

For France in particular, this would represent another form of failure. On the one hand, while it sometimes seems to fear, with the possible new enlargements, an evolution whose center of gravity would shift to its disadvantage, a too unenthusiastic attitude towards them and a position awkwardly defined as of a “mediator” in the war in Ukraine could only encourage such a movement, perfectly avoidable. On the other hand, while France sometimes intends to play up a certain difference with Washington while recognizing the United States as its “oldest ally,” a form of distancing, however tenuous, with President Biden’s commitment to supporting Ukraine may provoke an even stronger attraction of most European countries to American power. 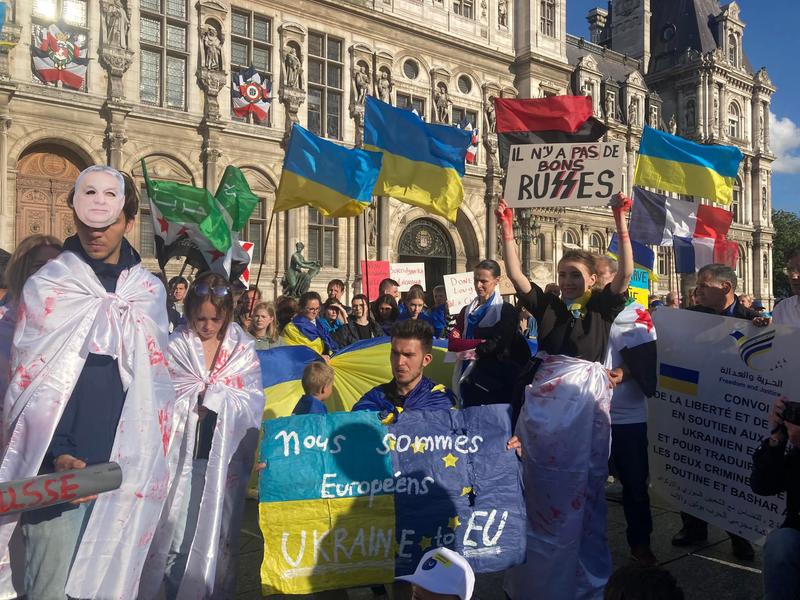 Demonstration in Paris on June 8, 2022. Photo: Stand With Ukraine

Of course, it should be remembered that France unambiguously supports Ukraine, provides it with weapons, including high-precision Caesar guns, and has taken the initiative to help Kyiv in the investigation of war crimes committed by Russian forces. But a few unwelcome expressions, the perception, true or false, of a temptation to spare the Russian regime and a lack of willingness to make it lose completely, continue to cast a real cloud among our allies and in Ukraine itself. The support, from the end of June 2022, and without any attempt at postponement, for Ukraine’s application to join the EU will certainly be a determining factor here.

For France, as well as for Germany, the Russian war against Ukraine forces us to update our strategic “software” — it should probably have come much earlier. This is becoming vital to ensure that France remains a driving force in this area within the European Union. For a long time, for reasons that are certainly understandable, France flirted with the idea of a form of exceptionalism that was also emerging in other areas. Enthralled by this idea, it probably did not perceive quickly enough the upheavals of the world and in particular the mortal danger represented by Putin’s Russia. Paradoxically, moreover, it has largely put aside what was also the source of its exceptionalism, at least in terms of discourse; its unconditional defense of human rights and its duty to prosecute regimes that violate them. It was also sometimes too fascinated by the so-called “big states”, establishing a kind of implicit hierarchy between countries according to their size and status — this largely explains its indulgence and attraction to Moscow (or Beijing) and its lack of attention, interest and knowledge, perceived as contemptuous, of Ukraine and other supposedly “small nations” to use Milan Kundera’s terms.

The time has come for a conversion of the gaze.

If we are to believe the optimists, the withdrawal of the United States from the Afghan theater last August and the subsequent decision by Washington…