Emmanuel Macron and Olaf Scholz at the Brandenburg Gate, illuminated in the colors of the Ukrainian flag, on May 9. // @GuillaumeDaret, screenshot

While the European Union and the Atlantic Alliance had shown a remarkable unity in their firmness towards the Russian regime and in their support for Ukraine, certain divisions, sometimes exaggerated, but also partly real, are beginning to appear again. Some perceive “nuances”, but it is to be feared that they will have serious consequences in the treatment of the Russian war against Ukraine. It is crucial that the EU and NATO countries adopt an unambiguous common position on support for the complete liberation of Ukraine.

At the Lennart Meri conference held in Tallinn from 13 to 15 May 2022, at which the author of these lines took part, the dominant impression was that Germany and France were put in the dock as being too lukewarm in their support for Ukraine. The reproaches came from all the countries of Central and Eastern Europe, but also from American experts and other EU countries. Also present at this conference, the journalist from Le Figaro, Isabelle Lasserre, had devoted a substantial paper to it, which accurately retraced the atmosphere. A week later, it is likely that Italy, whose Foreign Ministry has just proposed a “peace plan” largely favorable to Russian interests, would have suffered a similar fate. Hungary and Austria were also part of it, but these countries were considered less essential than Berlin and Paris, the two most critical capitals in the EU decision-making process.

To get to the heart of the matter, Germany was criticized for its continued dependence on Russian gas, for its slow supply of weapons, which were often considered obsolete, and for Chancellor Olaf Scholz’s unwillingness to immediately accept Ukraine’s candidate status. As far as France is concerned, the words of the President of the Republic on his wish not to “humiliate Russia” and the accession of Ukraine in “decades”, or his repetition of Putin’s narrative on the ‘brotherhood’ between the Russian and Ukrainian peoples have intrigued to say the least. Arms deliveries deemed too low, a scheme seen as not explicit enough — the “European political community” — for the waiting countries, and his lack of travel to Kyiv since the war, contrast with the visits of many other European leaders and the more alluring and ambitious talk of Ukraine’s integration into the EU from the Central and Eastern European countries and several others. He is also said to have had the intention, despite the denials of the Elysée, of seeking compromises with the Kremlin and a lack of straightforwardness in the objectives pursued in the war. In both cases, we have seen the resurgence of reproaches often heard after the August 2019 meeting in Bregançon and the statement of the idea of a new “architecture of security and trust” with Russia, the project, carried in June 2021 by Angela Merkel and Emmanuel Macron of an EU-Russia summit and the supposed search for an “appeasement” with Moscow. A week later, the words of the Minister for Europe on the prospect of Ukraine’s accession to the EU in 15 or 20 years were to revive a certain acrimony towards French positions.

Of course, one can also note that both Germany and France have also pushed through the adoption of tough sanctions against Russia — even if they appear to be very insufficient and there are still large gaps in terms of suspension of access to the SWIFT system of, and sanctions against, certain Russian banks and the scope of personal sanctions — and they are providing military equipment to Kyiv, even though it is still too limited in relation to Ukrainian needs. Both also provide substantial amounts of humanitarian aid, and France provides significant assistance in the investigation of war crimes. Conversely, Germany is too slow in breaking its dependence on Russian gas. As for France, which has made it clear that it can do without Russian hydrocarbons, it did not immediately renounce this source of energy, unlike the Baltic countries in particular. The fact that France remains open to some form of negotiation with Russia, even though Paris has made it clear that there can be no question of doing so other than in the terms desired by the Ukrainian government, continues to feed a suspicion that plunges into its past mistakes. In sum, both Paris and Berlin are unambiguously supportive of Ukraine and are providing humanitarian aid and arms, albeit less as a percentage of GDP than other European countries, but many are questioning what their line really is. 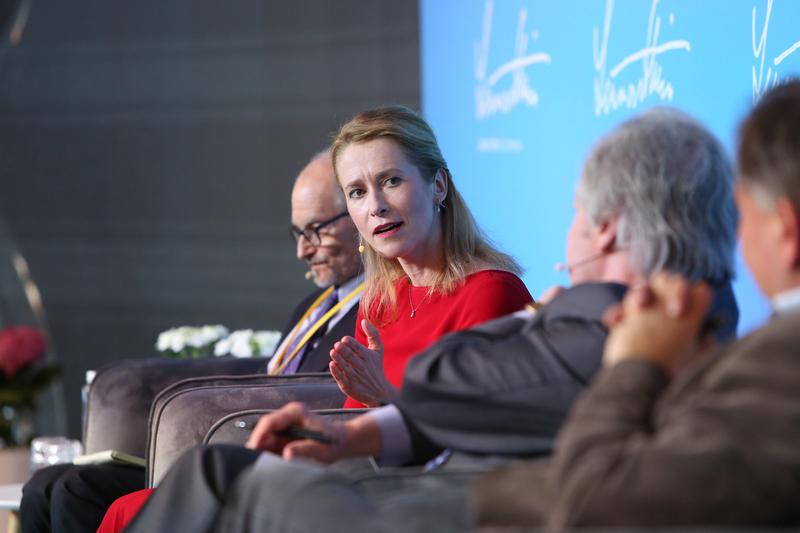 Kaja Kallas, the Prime Minister of Estonia, at the Lennart Meri conference

These echoes have reached Ukraine, where, while the accusation of a territorial compromise at the expense of Kyiv has been refuted, the reproach of a lesser commitment is still perceptible. Many of our correspondents in Ukraine are wondering whether France will agree to support Kyiv’s application to join the European Union in June 2022, and how far it will go to support the reconquest of Ukraine. President Zelenskyy’s remarks at the Davos Forum on the risks of a lack of unity in Europe must be understood in this perspective. He also deplored the fact that the weapons supplied by the Allies are not yet sufficient and still not adapted — he asked in particular for more multiple rocket launchers — and that they are arriving too slowly. He regretted that the sanctions are not already at their maximum after three months. In this respect, almost all countries are targeted.

It is not always easy to distinguish, in fact, between what comes from a general frustration of Ukraine with the action or inaction of the West and what comes from a reproach more particularly directed towards certain countries judged, rightly or wrongly, as weak links. As always in diplomacy, words and narratives are as important as actions, because it is through them that their interpretation is deciphered.

The first overall reality remains what was the main failure of all the Allies: the much too late nature of our military support to Ukraine and the very partial nature of this support — in particular without direct engagement of our forces, mainly airborne, in this conflict under the Responsibility to Protect (R2P) and Article 51 of the UN Charter. Nor did we provide Ukraine with immediate anti-aircraft protection. The overall reality was this: we allowed tens of thousands of Ukrainian civilians to be slaughtered without, for fear of Russian retaliation, acting in any substantial way. This alone will forever remain a stain on our humanity and our responsibility.

Secondly — and this is where the words are important — while this war should have been immediately considered for what it was, namely our own, most of the heads of state and government said exactly the opposite, explaining in particular that, even if they supplied arms, they should not be considered as being at war with Russia or as being cobelligerent — which is, moreover, correct from a legal point of view, since the supply of arms is not a sufficient factor of cobelligerence. In short, they wanted to distinguish the war in Ukraine from what could be considered their nation’s involvement in the war. Moreover, a number of propagandists close to the Kremlin are now distorting this idea, claiming that this is an “American” or “Ukrainian-American” war, as if to better abstract Europe from it and to drive the nail into the coffin of a well-known anti-Americanism within the pro-Putin lobby. This has sometimes given rise to contortions on the part of European leaders such as “We support you, but we are not committed”. This can only contribute to further obscuring perceptions.

After three months of Russian war against Ukraine and tens of thousands of Ukrainian civilians murdered by Russian forces, a return to some form of European disunity could only work in favor of Putin’s regime. It would also discredit the EU and the Alliance. To nip these centrifugal tendencies on Ukraine in the bud, the time has come to adopt a straight and clear line, implicit rather than circumvented. This should be based on five pillars and accompanied by immediate action.

Let us never forget that the fate of the war in Ukraine will determine the destiny of countries on the verge of tipping, but also the future of Russia. If the West does everything for a total victory of Ukraine, it will also act for the good of other peoples, and also for the Russian people who, one day, in front of the century of crimes, from Lenin to Putin through Stalin, will be able to do the work of consciousness that the Germans have accomplished with Nazism. One day, perhaps Ukrainians and Russians will be able to speak in unison about these crimes.

But for peace to come, Putin’s Russia will have to be defeated — radically, totally. It is urgent that Western leaders do their duty.

The precipitous withdrawal of the Americans from Afghanistan was initially welcomed with jubilation in Moscow. Russian media were not only gloating…