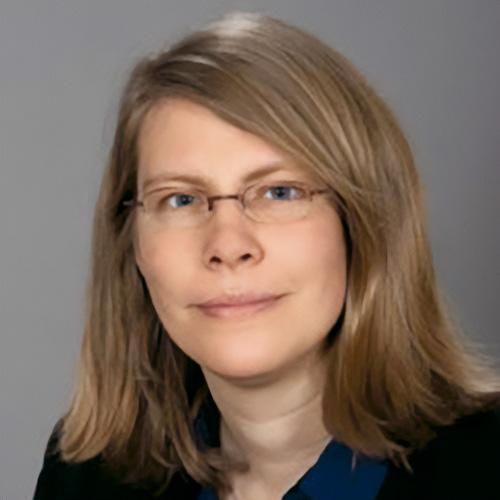 German historian, political scientist and journalist Susanne Spahn analyzes the activities of Russian state media in Germany. Despite the ban on them, RT and Sputnik are finding ways to continue their disinformation operations.

“Without doubt, the weapon of information is being used in critical moments — and war is always a critical moment”, Margarita Simonyan, editor-in-chief of the Russian broadcaster RT, explained in an interview with the Russian platform Lenta.ru back in 2013. She made clear that the Russian state media abroad act as a weapon in an information war. When analysing the reporting of the Russian state media, it is important to be aware of this kind of self-perception of the Russian state journalists. The ongoing war in Ukraine has clearly shown that RT and the news portal Sputniknews (SNA) are tools for defending Russia’s foreign policy goals in an aggressive manner. RT und Sputnik have paved the way to war and continue to justify it every day. Their main messages: The West is Russophobic and wants to contain and destroy Russia. The western alliance, Nato, is just using Ukraine as a tool to wage war against Russia. By doing so they reverse the facts: It is not Russia attacking its neighbour country, but the West, who is the aggressor.

Another narrative is not new, but nevertheless a constant refrain that is being spread since the annexation of Crimea: These narratives are not new, but nevertheless they have been a constant refrain being spread since the annexation of Crimea, especially ones about the treatment of Russians in Ukraine. The Russian state media reports that Ukrainian nationalists threaten Russians and Russian-Speakers in their own country. For example, a RT DE report from April 25 states that nationalists would “extinguish the whole population in Donbass” and “cut off children’s heads.” The claim of genocide against Russian-speakers in the Donbass has been repeated frequently, although no evidence has been provided so far. The aim of such reporting is clear: to justify Russia’s war in Ukraine, denigrate Ukraine internationally and blame the West for the aggression.

At the beginning of March, the EU imposed sanctions against RT and Sputnik. But in Germany the German language editions, RT DE and SNA, have kept working and spreading their contents on the internet. “No to censorship” — demand the editors of RT DE on their website and advise their users how to circumvent the sanctions. The RT DE contents are available on several websites under different domains, on the platform Odysee, on Yandex messenger and the Russian social media network Vkontakte. When starting the Live TV-program it says “Sorry, but the Livestream is not available in the EU”, but this can easily be circumnavigated by using a VPN. The same is true of SNA, which is still accessible on Odysee.com and Telegram under the label “Satellit”.

Another task is to whitewash the war. It is called a “special military operation” and in Russia the usage of the word “war” is forbidden by law. Violators will be fined up to 15 years in prison for spreading “false” information about the Russian army. On 24 February, the day of attack, RT DE spread the Russian defence ministry’s statement that cities and civilians wouldn’t be attacked — within some hours the world could see on TV how Kiev, Charkiv and other Ukrainians cities were targeted and civilians died. Since then, the Russian state media has blamed Ukrainian nationalists for war crimes and casualties. In March, when Russian troops surrounded the port city of Mariupol, RT DE wrote that “Ukrainian Nationalists keep taking hostages and prevent 130,000 civilians from leaving the city” (RT DE, March 24, 2022). The Russian leadership is depicted as a victim of the West. “It is unbelievable how Vladimir Putin, the president of the Russian Federation, is being discriminated against”, complained an author on RT DE (June 28, 2022). The West did not take Russia’s security interests seriously he wrote repeating the narrative of the Kremlin. The article was entitled: “They were laughing about Putin! Now they stopped”.

The Russian state media try to undermine Germany’s support for Ukraine by warning that it will inevitably lead to Germany’s political and economic decline. An RT author stated that Germans concluded a pact with Ukrainian fascists because they were still fascists themselves. “The idea of the Slavs being subhuman [Untermensch] is still smouldering and easy to be activated.” (RT DE, May 10, 2022) Several reports have claimed that Germany is only a puppet of the US and that the Western anti-Russian policy will lead to nuclear war. Thus, RT DE exploits existing fears for political goals. 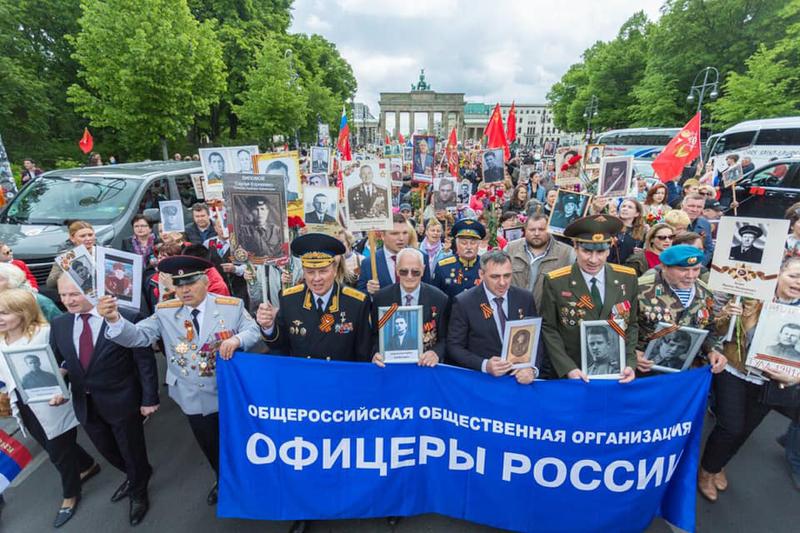 The Immortal Regiment in Berlin, May 2019. // Facebook page of Anton Tsvetkov

This kind of reporting is especially effective among the Russian-speaking community in Germany. Around three million Russian-speakers, most of them ethnic Germans from Kazakhstan and Russia, comprise the largest migrant group in the country. Russian state media warn of discrimination and hostilities against Russian-speakers, for example a report headed “Stop hating Russians!” (RT DE, April 4, 2022). Several car rallies were organized in Berlin, Bonn, Cologne and other cities, where people, most of them Russian-speakers, supported Russia in the war against Ukraine and demonstrated with Russian flags.

RT DE has even enforced its reporting by offering a Live-Ticker on war in Ukraine. This seems to be surprising as there is even a double ban on the Russian state broadcaster showing it. Beside the EU-sanctions, the Berlin media-regulator MABB prohibited the TV-program almost directly after it started in December 2021. This is due to the fact that the German based RT DE Productions GmbH has no licence from the German media regulator, but instead received one from Serbia. The MABB insisted it was in its competence to deal with this question and not the authorities in Serbia, as the production company is based in Berlin. The problem RT DE faced is that due to German law a state media outlet is not allowed to broadcast in Germany. This is why RT first tried to get a licence in Luxemburg, where the request was rejected. At the beginning RT DE ignored MABB’s ban and consequently was fined by the media regulator. The Russian broadcaster sued the media regulator, but the Berlin administrative court confirmed the MABB ban in March. At the beginning of April, the media regulator announced that “the RT DE Productions GmbH has fully stopped broadcasting the TV program ‘RT DE’ in Germany”. Unfortunately, this is only true for broadcasting via Satellite, the online Live-Stream is still accessible by using a VPN. Apart from that, the MABB ban refers only to the TV-program, not to the RT DE online news platform, which is still available under several domains. This clearly contradicts the EU-sanctions, which refer to all ways of dissemination, via satellite, cable and the internet.

Russia in turn, demonstrated how to act decisively against the German broadcaster Deutsche Welle (DW) in Moscow. At the beginning of February, even before the war against Ukraine started, Russian authorities forbade DW’s broadcasting and cancelled the journalists’ accreditations although the German company had valid licences in Russia for its programs in German and English. DW had to leave Russia and moved to the Latvian capital Riga. Meanwhile, most of the foreign and Russian independent media outlets are either closed or blocked in Russia. In contrast to that, RT DE continues to work in Berlin as usual. The chief-editor Simonyan and the RT-leadership in Moscow are under sanctions, but the local staff in Germany is not.

The crucial question is, why authorities in Germany do not act more decisively to implement the EU-sanctions and prevent RT DE from spreading their web-content and TV-program on the internet. The Federal Government Commissioner for Culture and the Media, Claudia Roth, supported the EU-sanctions against RT and Sputnik saying according to the newspaper Welt that they are “central tools in an alleged information war”. At the same time, she made clear that “it is certainly possible not to limit the work of journalists when they stick to journalistic standards.”

In my opinion, it is obvious that RT DE and SNA do not maintain journalistic standards when spreading misrepresentations about “Ukrainian fascists and the allegedly warmongering Nato” on the one hand, and approving Russia’s war of aggression on the other hand. The German Criminal Code in Article 140 fines the approval of crimes “in a way that is suitable to disrupt public peace, publicly, in a meeting or by spreading content”. This is why Bavaria and some other German federal states forbade to publicly show the symbol “Z” popular among supporters of Russia’s war against Ukraine. The Bavarian Minister of Justice, Georg Eisenreich, explained that freedom of opinion is protected by the constitution, but it ends where the criminal law begins — and as aggression is considered as a crime, consequently its approval is forbidden.

With this logic, RT and Sputnik’s ongoing approval of war against Ukraine should not be protected in Germany as it is a completely false understanding of the freedom of press and opinion.

Meeting in Riga (Latvia) on 1 December 2021, representatives of NATO member countries reaffirmed their support for Ukraine.