Today, the Ukrainian army is being tested in the Don basin. Some people explain that it would have to consent to a Russian victory. Is this a mood swing or cowardly hypocrisy? It is important to realize that Russia’s war against Ukraine is a long-term one and that we must want the latter’s victory.

The political-media system is prone to cyclothymia. After having feared the collapse of Ukraine in the days following the Russian offensive of February 24, the resistance and the affirmation of a “nation in arms” gave rise to the greatest optimism. The question now was how far to support the Ukrainian counter-offensive. Shouldn’t Vladimir Putin’s Russia be spared “humiliation” by offering it a “way out”? Even if it means rewarding the aggressor, humiliating the aggressed and sanctifying ethnic cleansing with bombs?

It is first of all a question of principle and of the prevalence of the general norms of law: the sovereignty, territorial integrity and inviolability of the borders of a national state fully recognized on the international scene and a member of the UN since its foundation! An independent state since the dissolution of the USSR, a decision not imposed by the West but desired by the Russian, Belarusian and Ukrainian presidents at the time. The Ukrainian borders were recognized by Russia itself. Let us recall the signing of the Budapest Memorandum (1994) and the Russian-Ukrainian friendship treaty (1997). On a general level, the Helsinki Final Act (1975) excludes the modification of borders by force, a principle taken up in the Charter of Paris (1990), which marked the end of the Cold War.

Turning a blind eye to such a violation of the law, in the name of “pragmatism”, i.e. of a cynical attitude, would stimulate the geopolitical revisionism and historical revanchism of the master of the Kremlin and the Chekist structure that serves him. After a strategic pause, necessary to digest its territorial gains, reconstitute its forces and play in the interstices of the Western front, Russia, driven by the cult of power (derjavnost), would set out again to attack the borders of Europe. In the meantime, an intensified “hybrid war” would have tested the resistance in Northern Europe, on the borders of the Baltic States and Poland as well as in the Black Sea basin.

It is necessary to underline here the youth and fragility of the geopolitical structure of Europe, an “old continent” whose borders date back only to the 20th century. It would be easy for one or the other state to write a historical dissertation and to exhibit maps of the past to justify claims and coups de force. In short, the running gag about Francis Fukuyama, less read than quoted, the disillusioned talk about the revenge of History and the resignation in front of the fait accompli would announce the return to the happy warmongering and without borders of other times. 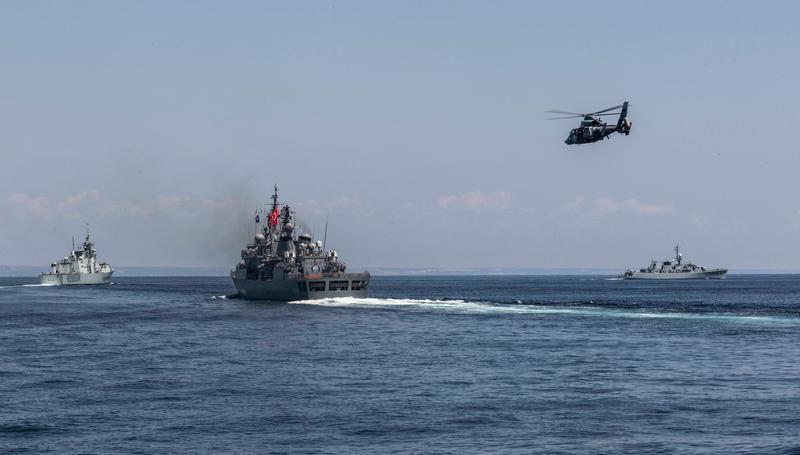 The end of peace in Europe and the collapse of the international order which, for all that, contained the aggressiveness of the revisionist powers, would have repercussions on a global scale. As an ally and supporter of Russia-Eurasia, the Chinese Communist Party-State and its “little helmsman”, Xi Jinping, would be encouraged in their enterprise to destroy Western hegemony. The pressure on the Taiwan Strait, the islands and archipelagos of the “Asian Mediterranean” (South and East China Seas) would be accentuated. Not to mention the Himalayan borders of the Indian Union. In the wake of Sino-Russian Eurasia, small and medium-sized “troublemakers” would be tempted.

For all these reasons, the West must show moral clarity, unity of purpose and resolve in its support for Ukraine. Notwithstanding game theory and clever developments on the gradation of retaliation, interspersed with appeals for peace, it must be understood that Putin wants to take Ukraine, no longer at once but in tranches, and that he will destroy what he cannot conquer. His armies and his police machine will advance until they are stopped. He himself sees himself at war with the “collective West”, which brings us back to the great political lesson of Julien Freund: “It is not I who designate the enemy, it is he who designates me as such”. It is as simple as that.

So there is no real and honorable alternative to the victory of Ukraine. One can already hear the false metaphysical questions about the meaning of such a term: what is victory in the 21st century? Is not the war dead? Doesn’t everything just flow? On the pretext that nothing is eternal here below, the sophists dismiss the being and withdraw into the domain of representations. Let us simply refer to the definition that the Larousse gives of victory: “Favourable outcome of a battle, of a war”. “Opposites: debacle – rout – discomfiture – rout”. More or less, this corresponds to what strategists call the “desired end state”, assuming that one does not seek defeat.

The question remains as to the terms of a Ukrainian victory in the present war. The outcome of the battle of Kiev has already prevented the worst: the collapse of the Ukrainian state. The battle of Kharkiv has shown the ability to conduct local counter-offensives. In the Don River basin, resisting the bombardments and stopping the advance of Russian units on the ground would be other successes. Further deliveries of Western weapons will contribute to this (see the forthcoming delivery of US multiple rocket launchers).

The situation in the Don River Basin cannot overshadow that in southern Ukraine. Of course, the front line is hardly moving and Mykolaiv has not fallen. Nevertheless, the territories conquered to the north of the Crimean peninsula are important, and Ukraine is deprived of part of its coastline. As for the port of Odessa, it is the object of a naval blockade which asphyxiates Ukraine and paralyses all movement in the Black Sea, at the risk of the world food balance.

In this part of the territory, the most important thing is to free Odessa, a port without which Ukraine would become a geographically landlocked state, deprived of access to the “greater Mediterranean” (including the Black Sea) and thus to the World Ocean. As things stand and for fear of a rise to extremes, a naval operation by NATO or a Western coalition to force the blockade seems hardly conceivable.

Failing that, the possibility of an international fleet under the UN flag, with a mandate voted by the UN General Assembly, is being considered. From a diplomatic point of view, such a project could allow a certain number of emerging and non-aligned countries, which have cautiously stayed away from votes condemning the Russian action, to “come on board”. From an operational point of view, one has to have doubts: is the Russian will to power inhibited by the colors of the UN? Come on!

Another response would be to deploy coastal batteries and long-range anti-ship missiles on the Ukrainian coast and along the Black Sea coast, in order to keep Russian ships at bay. Grain ships could evacuate grain from the port of Odessa to the Turkish Straits and the Mediterranean Sea. Let us not forget, however, that Russia has very long-range strike capabilities.

Let’s summarize. To hold on to the Don River basin, the geohistorical border of Europe since Antiquity, and to preserve the opening of Ukraine to the Black Sea; to maintain the existing Western diplomatic front on the principle of sovereignty and territorial integrity, including Donbass and Crimea: these are the terms of a Ukrainian victory, keeping in mind that this war is part of a much larger conflict.

It is in this perspective that Ukraine should be integrated into the Euro-Atlantic bodies: the European Union and NATO. In fact, simple membership in the former, a commonwealth rather than a commonwill, would not be enough in terms of defense and security. If this were the case, would Finland and Sweden be knocking on NATO’s door? The comparative advantage of NATO is explained by the hegemonic leadership of the United States and the means it mobilizes for the defense of Europe.

Those who clumsily refer to the “peace camp” (a sad reminder of Soviet propaganda) will object that we have to live with Russia, which implies that we must give priority to diplomacy. Sophism. Putin is not a “man-of-effect” who would be satisfied with reacting to “man-causes” (the West): he wants to conquer territories formerly under Russian-Soviet domination and claims to assert his domination over Europe. “Concessions” and “compromises” will encourage him to move forward. In reality, diplomacy is governed by the balance of power on the ground.

In short, submissive behavior will not save us from danger. It is important to understand that the Russian threat to Europe cannot be explained by a misunderstanding, regrettable blunders or a technical-institutional problem. This threat is structural — it is a geopolitical fact that the policy of appeasement of the last fifteen years has not been able to modify — and it must be countered.

Peace by force, therefore, in the order of the flesh, not evangelical peace and the eschatology of the last ends, which are of a different order. To realize this and to change our mental maps accordingly would be a great victory. It would mean breaking out of the impolitic behavior that Western governments have been indulging in for too long.

In Russia, the election is a dirty game. The whole process is controlled by the bureaucracy, the information system, and intelligence services.

The UN is experiencing a serious crisis following the Russian aggression against Ukraine.