This year, Kirill Serebrennikov, Russian director and filmmaker, is attending two major festivals in Cannes and Avignon because he is considered not only a major artist, but also a “victim” of the Putin regime. But as Béatrice Picon-Vallin, a leading specialist in the Russian performing arts, demonstrates, Serebrennikov’s career is complex and ambiguous.

From the start of the invasion of Ukraine by Russian Federation troops, I opposed the idea of a boycott of Russian artists who rejected the war (see Michel Guerrin’s piece in Le Monde ,”The Art World Must Show Solidarity with the Anti-Putin Artists in Russia who Risk a lot”). Art is a country in itself where all meet through dialogue, in the common sowing and harvesting, the reconstruction of destroyed bridges, the creation of possibilities, through creative exchanges. However, some cases raise particular questions that we would like to be answered, such as the case of Kirill Serebrennikov who is the only Russian artist attending two major festivals, Cannes and Avignon.

Why does the Cannes Festival refuse accreditation to Russian critics under the pretext that they have written for a newspaper funded by the oligarch Alisher Usmanov, while they allow into their selection Serebrennikov’s film Tchaikovsky’s Wife, produced by the Kinoprime Foundation which belongs to a very powerful oligarch, Roman Abramovich? Don’t more contemporary films qualify, for example by students of the great Alexander Sokurov? As for the Avignon Festival, this is the third time it has invited Serebrennikov. Does this mean that he is the only respectable and talented Russian director today?

The program of the Avignon Festival defines Serebrennikov as “one of the major figures of contemporary creation in Russia” and praises his “radicality” and “his pro-democratic stance”. Yet the biography of a man who now describes himself as Ukrainian through his mother, as well as Jewish and Buddhist (see his recent interview by Brigitte Salino and Aureliano Tonet in Le Monde) is much more complex and ambiguous. And the importance that he has acquired in the imagination of the Western media as a “martyr”, as the only incarnation of the artist fighting the regime and for freedom of expression must be strongly nuanced because there are other Russian artists who, unlike him, have never collaborated with the dark forces of power, or stopped in time.

We are not talking about his creations here, but about his career. In 2011, Serebrennikov directed his adaptation of the novel Okolonolya (Around Zero), a “gangsta fiction” written in 2009, under an easily decipherable pseudonym, by Vladislav Surkov, who was then “the first deputy director of the administration of the president of the Russian Federation” - a text that treats corruption in the Duma and the media as an inevitable phenomenon inherent to the exercise of power. The novel is written for the ruling class, the gangstas (members of a gang, in this case the ruling mafia). 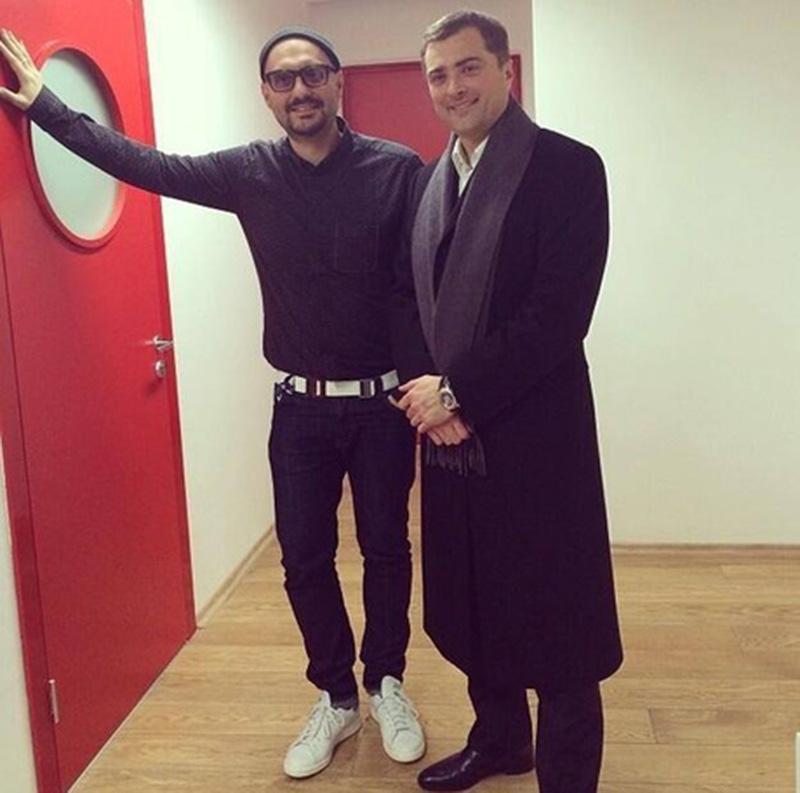 Vladislav Surkov and Kirill Serebrennikov at the preview of Dead Souls , in January 2014. Photo : Ura.ru

The theater adaptation was produced by Oleg Tabakov, a famous actor who also directed the no less famous Moscow Art Theatre known for its very expensive tickets and very chic audience. In 2012, Serebrennikov was offered the premises of the old Gogol Theatre, which he turned rather abruptly into the Gogol Center, intended to conduct artistic experiments, with a young audience, open to director residencies and influences of German theater. We in France know the history of the Gogol Center and the 7th Studio, the troupe which he recruited among students of his course at the Studio-School of the Art Theater, and of his Platforma project. We also knew about subsequent accusations of embezzlement against him, his arrest and that of his financial team in 2017, the international fallout of his house arrest (without any imprisonment, in his case, in a country where the justice system is compliant) for almost two years, a time when he was nevertheless allowed to go out (to the swimming pool, for example), which he used to complete a ballet on Nureyev for the Bolshoi (part of the repertory at the time) and in which he produced a number of other creations, thanks to the Internet, in his own theater and abroad. This means that he was not deprived of his freedom of expression, his freedom as an artist. We have read about the sometimes Kafkaesque course of the trial. Serebrennikov was finally released, along with his associates, with an extremely large fine to be paid to the state.

What we in France never paid attention to was the friendship between Serebrennikov and Vladislav Surkov, whom independent Russian media referred to as the director’s “protector”. Can we speak of a Faustian agreement between the “protégé” and a Mephisto with a wrinkle-free face? In any case, Serebrennikov became part of the “family”, as they say in the mafia and in Russia, and he benefited from Surkov’s power to get a lot of money from the state to support his projects. The mysterious Surkov, a character who went under the radar of the Western media, discreet, but worldly, cynical to the extreme and an absolute manipulator, a writer in his spare time, has been in Vladimir Putin’s close circle since 1999, after passing through the oligarchic networks. He is the “inquisitor of the shadows”, the theorist of Putinism (inspired by Aleksandr Dugin and others), the author of political articles in which he uses the second law of thermodynamics, which can be summarized as the need to export fear and chaos in order to establish and develop the power of a state subjected to social entropy. But since the end of 2013 he has also been the “curator” of Ukrainian affairs and in charge of actions in the Donbas from the start. He set up extremist combat groups and may have initiated the current invasion by giving various pieces of information to Putin. Finally, he is the one who “made” Kadyrov as he is today - Surkov is half Chechen. These are just some of the trails that can easily be followed and which lead to many astonishing surprises. But no one can call such closeness to such an accomplice of power radical opposition or dissent.

One of the features of the confusion of the Putin years is the desire of the Kremlin’s high officials, described either as “liberal” or “postmodern”, to pass for artists and to get closer to the art milieu. This is a feature that must be taken into consideration in future studies of Russian culture in the 21st century1. But the question right now is this: who shall we see in the Cour d’honneur of the Palace of the Popes in Avignon, at the Festival? The Black Monk after Anton Chekhov, heavily reworked, or the shadow of the man they call in Russia “the Kremlin’s eminence grise”? It would be more than useful if Kirill Serebrennikov were now more transparent about his entire career, or at least if the general public knew something about it. Even if Surkov seems to be in disgrace today, such an alliance cannot be ignored or presented as natural, as Serebrennikov just did at his Cannes press conference, where he also called for sanctions against Abramovich to be lifted.

Faced with the perilous situation that the West’s unanimous condemnation of the war in Ukraine represents, Russia has launched…