Fragment of a cartoon by Koukryniksy, published in the magazine “Krokodil”, winter 1953 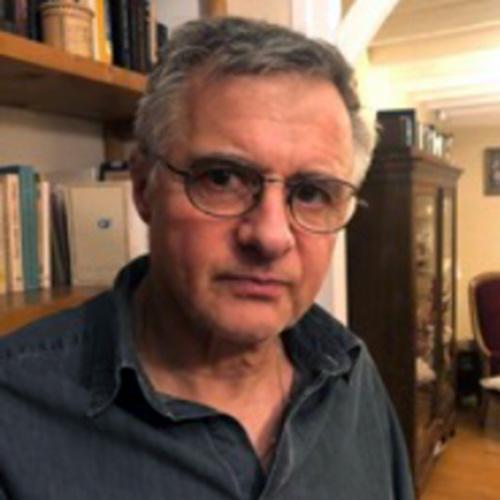 After Sergei Lavrov’s outrageous statements about Hitler’s “Jewish blood”, which caused an outcry in Israel and around the world, Vladimir Putin is reported to have apologized in a telephone conversation with Israeli Prime Minister Naftali Bennett. But Boris Czerny, an expert on the Jewish heritage of Ukraine and Belarus, writes that this episode marks a return of anti-Semitism in Russia.

In a recent statement to an Italian television channel, Russian Foreign Minister Sergei Lavrov said: “[President Zelensky] claims that the Nazification in Ukraine is impossible because he is Jewish. I may be wrong, but Hitler also had Jewish blood, which means absolutely nothing. The Jewish people in their wisdom say that the most virulent anti-Semites are Jews as a rule.”

These words, which have caused outrage in Europe, should be seen in the context of the semantic loss, in Russia and Ukraine, of the vocabulary referring to the Second World War in general, and to the Holocaust in particular. Putin’s use of the term “denazification” to justify the “special operation” launched against Kyiv on February 24 is the most striking example. Also, Volodymyr Zelensky’s use of the term “genocide” to describe the atrocities committed by the Russian army in Bucha, and more broadly his speech to the members of the Knesset and the parallel he drew between the Holocaust and the invasion of Ukrainian territory, caused a stir among the ranks of Israeli politicians and authorities, who were reluctant to give unwavering support to Ukraine in order to avoid falling out with Russia. The presence on May 4 in Moscow, at Lavrov’s invitation, of a Hamas delegation headed by its deputy chairman, Abu Marzouk, is a strong signal from the Russians. The Israelis would do well to remain cautiously neutral, otherwise there will be some bloody turbulence in the streets of Tel Aviv and other cities in the country.

The blackmail of Israel by the Russian authorities is only one aspect of the widespread expression of unabashed anti-Semitism that has been spreading in recent days on Russian television - which for many Russians remains the sole source of information — but also in the print and electronic media. Thus, the online publication News2 claims that Lavrov raised “the entirely taboo topic of the compatibility of Jewishness with Nazism and the Jewish roots of Ukrainian nationalism” (sic). And the “business newspaper” Vzgliad takes up the theme of the tolerance of Ukrainian “neo-Nazism” by the Israeli authorities, quoting Maria Zakharova, spokeswoman of the Russian Foreign Ministry, who speaks of “Israeli mercenaries” among Ukrainian fighters.

These hints of anti-Semitism are quite common. A few days ago, a former head of Russian military intelligence, Vladimir Kvachkov, complained that there were too many “Yids” in the Russian army to fight the “Zionist-Banderist” power in Kyiv, without the slightest objection from authorities that claim to be so eager to fight Nazism and anti-Semitism.

On the flagship talk show of Russian state television, “An evening with Vladimir Soloviev”, hosted by this so-called “journalist”, a speaker, Yulia Vitiazeva (who writes editorials for the ultranationalist agency News Front), recently denounced the anti-Russian and anti-Soviet remarks of those who refer to the rape and murder of civilians committed in Ukraine both now and during the advance of the Soviet army toward Berlin in 1944, pointing out the origin of these impudent cosmopolitans with such “Jewish” names: those of the American researcher Anne Applebaum, of Tatiana Felgenhauer, a journalist at Echo of Moscow, and Yevgeny Roizman, a poet and a public figure. 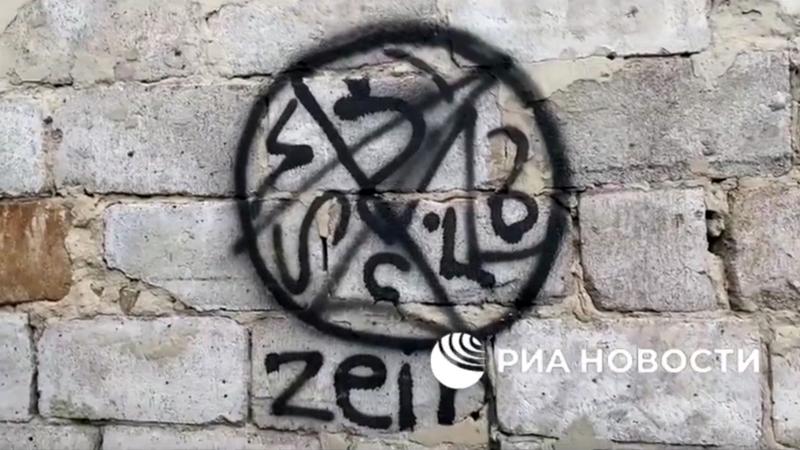 A “satanic seal” and a Hebrew letter, signs of “black magic”, allegedly found by Russian propagandists at a Ukrainian military base in the Luhansk region. // RIA Novosti’s Telegram channel, screenshot

Also on Soloviev’s show, Margarita Simonian, the head of RT, the Russian state-funded international news channel, condemned those who in these dark hours betray their homeland and seek refuge in Israel. The (Jewish) artiste and comedian Maxim Galkin was a particular target of her attacks. She called him a “scumbag”, insisting on the fact that it was a matter of “public knowledge” that Galkin was gay, which had not prevented him from marrying, “for money”, singer Alla Pugacheva. In fact, Simonian took up the theme raised in mid-April by one of the pillars of the Putin regime, Nikita Mikhalkov, who castigated the “traitors” who chose to emigrate, focusing on celebrities of Jewish origin.

All of these remarks are the elements of the infamous anti-Semitism slurry, which sometimes takes on the attributes of anti-Zionism. There is nothing new under the sun, not even Lavrov’s speech, which, in addition to the assertion about Hitler’s Jewish origins, repeats the historically questionable and disputed arguments about the responsibility of the Judenrat in the extermination of the Jews of Poland and Belarus.

Lavrov is an educated man. He spent part of his long career under the Soviet regime, which he served loyally, just as he serves his master Putin now. He knows the meaning of words and he knows that the association of the two words “blood” and “Jews” has a particular resonance in Russia. It refers to the accusations of ritual crimes and the notorious Beilis affair, named after a Jew from Kyiv suspected of killing a Christian child in 1911 in order to use his blood to make unleavened bread. The “Jewish blood” motive also evokes the so-called “conspiracy of the white coats”, namely the arrest of a number of doctors, almost all of them Jewish, who were accused in 1953 of assassinating two Soviet leaders and of planning to assassinate others.

With Lavrov, who is vigorously supported by his ministry, we see the reappearance of the shadow of the enemies from within, of those sold out to the West and of the decadent cosmopolitans allied with the “Nazis”, who are themselves Nazis. Once again, we have seen it all beforel. During the Six Day War, Soviet newspapers, and especially the satirical magazine Krokodil, offered their readers images of Jews in the uniforms of bloodthirsty soldiers or in the suits of Jewish bankers, all equally identifiable by their hooked hands and large noses and obsessed with the desire to enslave the Arab world and extend their power over the world.

Putin’s and Lavrov’s Russia finds its inspiration in the darkest pages of its history, those of the USSR: silence and lies about the Holocaust; the execution of the members of the Jewish Anti-Fascist Committee and assassination of their chairman, the great actor Solomon Mikhoels; the infamous mark in Soviet passports indicating “Jewish nationality” and limiting de facto access to higher education and to many professions; and the grotesque denunciation of Zionism and Judaism.

The history of Ukraine has been written ever since the country became independent. It will be time, when the time comes, to sort out the symbols and heroes that it has chosen. But this is a long-term task, which is only possible in times of peace, not in times of war.

The Russian military threat to Ukraine and, by extension, to Mitteleuropa (Central and Eastern Europe…