President Joe Biden’s phrase calling Vladimir Putin a “butcher” and his exhortation, if not his prayer, “For God’s sake, this man cannot remain in power” have provoked many reactions. In fact, they only expressed the truth. While some hide behind the saying “not all truth is good truth,” few appreciate the fact, perhaps including the American president, that such truth can only have consequences. If the gap between the statement of fact and the consequences widens, the effects can be profoundly destructive to the public mind.

Joe Biden’s assertion is actually not new: he had already called Vladimir Putin a “killer” and a “war criminal”. These expressions describe an old reality: we know that the Russian army committed numerous war crimes during the second Chechen war, well documented in particular by Anna Politkovskaya, Natalia Estemirova and Boris Nemtsov, all of whom were assassinated. The same was true in Georgia, as the European Court of Human Rights ruled in 2021. In Syria, the Kremlin’s war crimes are also attested. More recently, in Mariupol in particular, dozens of Oradour-sur-Glane have been perpetrated. Such crimes, for which there is no statute of limitations, have legal consequences that are as essential as they are necessary: those who ordered and carried out the crimes can and must be individually brought before the competent courts.

Such a designation by a head of state expresses, beyond the factual and legal reality to which it refers, a recognition of the nature of Putin’s regime and its link, so to speak, organic, with the crime. It also contrasts with a previous practice of non-incrimination: one recalls, in particular, the official statements within the UN that asked the Russian regime to put pressure on Bashar al-Assad’s regime to show more restraint in perpetuating crimes, even though the Russian forces were committing them on their side. These linguistic detours were supposed to “spare” Moscow and avoid any “provocation” in the event of future negotiations, but they have not only led to the perception of Russian regime’s innocence or to the whitewashing of its crimes, but above all they have had no concrete effect. In fact, the Kremlin continues to commit such crimes in Syria to this day.

This must be remembered in the light of what is happening in Ukraine. Avoiding any “escalation” in rhetoric and actions, as suggested by President Emmanuel Macron, will not have any more effect, even if there can be really sincere negotiations on the Russian side, which is highly unlikely. It is in fact unthinkable, except to thoughtlessly buy an illusion of “coming into line” with the Kremlin, to look for a off-ramp for Russia or a solution that would aim to “save the face” of its leader. No one sees why or how Putin would abandon not only his ideas of destruction of Ukraine and Ukrainians as a free people, but also his propensity for crimes. To assume that the crimes should be kept silent would be to prepare for a return to normalcy with the Russian regime, i.e. for the reintegration of Putin’s Russia into the international arena and for the easing of sanctions against it. It is hardly surprising that the criticism of the White House occupant has been particularly virulent on the side of the traditional complacent for whom war crimes are precisely what should be looked away from.

The same is true of Joe Biden’s second sentence: he did not call for a regime change, especially not by force, but only recalled an obvious fact that has been expressed many times by the author of these lines and many others: there will be no stability, security and peace in Europe and in a large part of the world as long as Putin’s regime is not gone. There will be no security and freedom for the Russian people either. The embarrassed explanations of some of the American president’s advisers, aimed at softening his words, were not particularly judicious. It is understandable that previous attempts at regime change, not always successful, have brought lasting discredit on the idea of regime change and are now considered red lines, but the fact is that it is Vladimir Putin who has crossed them for too long. It is well known that regime change, even if it is up to the Russians alone to create the conditions for it, is a goal, albeit a tacit one, that the Allies can only consider necessary for peace and security.

But curiously, these remarks by Joe Biden left in the shade another of his assertions, clearly less happy, which was later repeated by NATO Secretary General Jens Stoltenberg: the announcement of a sort of “red line” — he was careful not to use the term — that would constitute the use of chemical or bacteriological weapons by Russia in Ukraine. Despite the non-use of the term and the lack of precision as to the consequences that their use would entail, it is difficult not to think of the red line set by Obama in Syria and never applied during the chemical attacks in Ghouta. 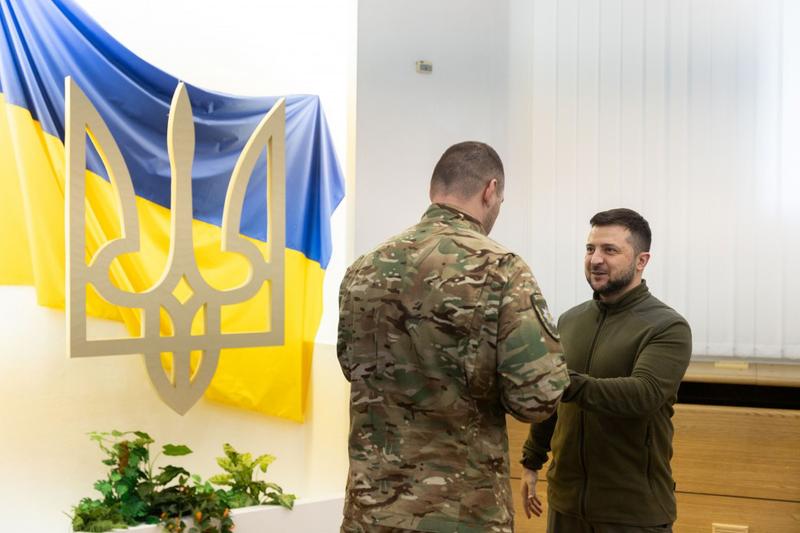 Decoration of a member of the rapid operational intervention unit by President Volodymyr Zelensky on March 19. Photo : Ukrainian President’s website

This was undoubtedly the first mistake made by Joe Biden: to allow for a massive response — which it is difficult to imagine could be limited to new sanctions — the nature of which no one can foresee, and thus run the risk of casting a shadow over the fullness of his resolution.

But there is a more fundamental error: differentiating between war crimes and the instruments used to perpetrate them. This debate has already taken place in Syria: how are chemical weapons worse for civilians than cluster bombs, the indiscriminate dropping of explosive barrels, guided missiles or the deliberate shooting of civilians in the streets? In all cases, the violation of fundamental international conventions, either on prohibited weapons or on this category of crimes as such, is proven. Targeting chemical and bacteriological weapons specifically in a possible massive response makes little sense, except with reference to the two specific conventions governing their use. It implicitly results in the establishment of a hierarchy of crimes, which logically leads to minimizing some of them. To push the reasoning even further, it would be tantamount to saying that there are crimes that are, so to speak, below the zone of tolerance, and others that exceed it. In other words, there are crimes that can be committed with impunity and others that cannot.

Third, this assertion invalidates the too-often heard argument that increased intervention (Western instructors on the ground to help the Ukrainians use the most effective anti-missile devices, increased aid to not only defend Ukraine, but also to repel Russian forces, etc.) will not be possible because of the risk of a nuclear retaliation by Vladimir Putin. We have already done justice to this argument in strategic and logical terms: certainly, no one can lightly dismiss such a risk and deny its existence. However, this would mean that, on the one hand, we would be leaving all autonomy of action to a nuclear-armed state that would have won the game and would have bought itself immunity — this could concern North Korea, China, Pakistan, and tomorrow Iran. On the other hand, would not taking such a risk to save the Ukrainian population massacred by conventional weapons cast doubt on our resolve to act if weapons that are not—in this case, chemical or bacteriological — were? One could also argue that the risk would be equivalent in the event of an attack against a NATO member country.

It is no doubt appropriate to measure here the gap that is opening up between our declarations and the reality of the action. How can we say at the same time that Vladimir Putin and his army are committing war crimes and behaving like “butchers” — that is to say, in a sadistic manner — and at the same time set a quasi-red line which, in fact, leads to tolerating this absolute barbarity? How, at the same time, to describe the crime in its immensity and to make a distinction between the instruments that lead to its perpetration?

There are two ways of making the crime tolerable in public opinion. The first is not to talk about it and to prefer words of appeasement to the dubious pretext of encouraging a negotiation that is no less dubious. This is why we must, on the contrary, name it, designate it, and point the finger at its authors, including Vladimir Putin, who is the instigator of all the others — which, moreover, should in no way remove, attenuate or wash away the responsibility of each individual person. The second is to mention it forcefully and eloquently and not to go to the end of the obligations that it entails for the leaders of free democracies.

The first path, chosen so far by democratic leaders, has been one of the causes of Putin’s victories over the past 22 years: it has led to not perceiving the nature of his regime and, above all, to not acting decisively even though it would have been much easier in 2008, 2013 or 2014 than today. It has led to a late awakening of the public opinion which has not measured, because of this silence, the reality of the actions of Putin’s regime, which has also favored the installation of his propaganda in people’s minds — not to mention the weakness of the fight against him.

The second way — denouncing the crimes, but with too little action to stop them — can be no less destructive for the public mind. Ignorance of the crime is the result of the first attitude; trivialization is the effect of the second. In both cases, this leads to a cognitive dissonance that is fraught with moral as well as strategic effects.