The international crisis provoked by the Kremlin’s pressure on Ukraine, considered as a pseudo-state doomed to destruction, has the virtue of clarifying the lines of force of the global strategic configuration. On the one hand, the expression “new Cold War” is no longer the object of a Freudian denial: from the Euro-Atlantic space to the Indo-Pacific, the West is faced with a Sino-Russian alliance. On the other hand, the United States remains a “European power” that cannot turn away from the Old Continent without serious effects and backlashes.

In the present situation, Washington is taking care to consult with its main European allies. Thus, the “Euro-Atlantic Quad” — an informal directoire that associates the United States, the United Kingdom, France and Germany — appears in the open. This “minilateralism” is necessary, but it would be good if Poland, a key power on NATO’s eastern border, were to be associated with it.

In fact, France and Germany, the so-called “couple” that tends to consider Europe as a kind of co-ownership, are reluctant to take Poland into account in the power relations within the Euro-Atlantic bodies (European Union and NATO). It is true that the euroscepticism of the Law and Justice party (PiS), currently in power, does not facilitate the adjustments to be made. However, it is important to take the right measure of this country and of the transformations that have taken place over the last three decades, which make this European ally a putative candidate for the Euro-Atlantic Quad1.

During the Cold War, Poland was the very embodiment of this “kidnapped West”, described by the Czech Milan Kundera: “Culturally in the West, politically in the East, geographically in the center”. After this “Fifty Years’ War” (Georges-Henri Soutou), post-communist Poland was at the forefront of the transition to liberal democracy and the market economy. It was then seen as a political and economic model. In recent years, the rise to power of the PiS has changed the country’s international image2. In terms of the treaties and commitments made within the European Union, Poland is now seen as an “Eastern country” adrift: an example of “illiberal democracy”.

But let us leave aside the debate on the rule of law, a syntagm whose definition is sometimes unclear, the separation of powers and the relationship between national and European law. On this last point, let us simply note that the interpretation of the Polish Supreme Court does not seem to be so far removed from that of the Constitutional Court of Karlsruhe (primacy of the national constitution and vision of the European Union as a “union of states”). Our approach to Poland, within the limits of this article, is primarily diplomatic-strategic and geopolitical, the general objective being to strengthen the “Eastern barrier” that must contain Russian revisionist ambitions.

Certainly, it would be an exaggeration to see in Poland a new “great” European, capable of imposing itself in the direction of European affairs, concurrently with France and Germany. Nevertheless, its strategic location, between the Baltic and the Black Sea, on the eastern borders of Europe, as well as its diplomatic and military efforts, give this country a certain influence. From a geopolitical pivot, Poland has become a geostrategic actor capable of influencing its regional environment. 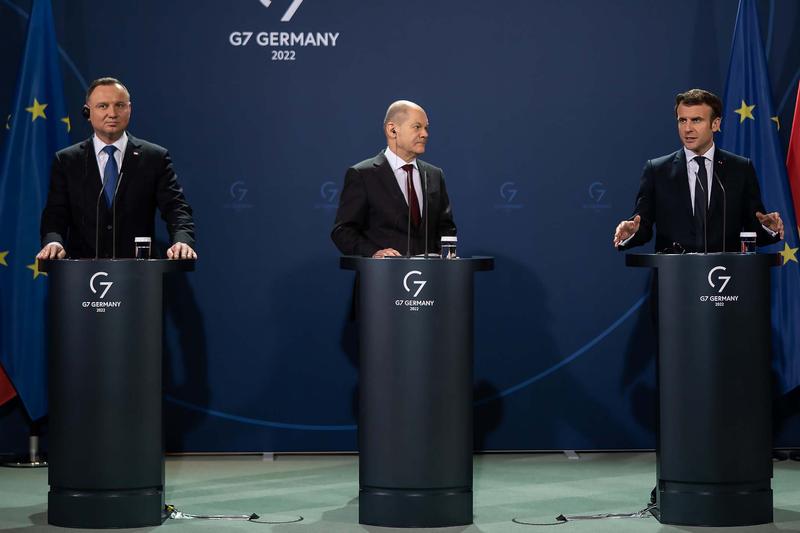 Some people present this country as a sort of polytrauma patient whose perception of international realities is distorted by an atavistic and irrational “Russophobia”; here we must go back to history. Victim of five territorial divisions in two and a half centuries, Poland is an ancient nation whose painful past commands powerful geopolitical representations. If internal instability was the cause of various tribulations, its historical vulnerability stems from its proximity to Germany and Russia. In the current geostrategic context, the Russian threat is obvious.

The long hostility of “Russia-Soviet”

Russia and Poland have long had a conflictual relationship. Although the Russian side emphasizes the temporary occupation of Moscow by Polish troops during the Time of Troubles3, from 1598 to 1613, it must be said that this episode carries little weight compared to the destruction of Poland as a state (1793-1795) and the repression of the Polish national movement in the nineteenth century (“Order reigns in Warsaw”). Two decades after the reconstitution of a Polish state, the German-Soviet Pact of August 23, 1939, determined a new division of Poland between Hitler and Stalin. Massacres (Katyn, April-May 1940) and deportations followed. And when Soviet troops, three years after the launch of Operation Barbarossa, succeeded in retaking the territories conquered by Hitler’s Germany, Moscow imposed a long period of occupation on Poland (1944-1991).

After the breakup of the USSR, Moscow and Warsaw sought to rebuild their relationship. To this end, the two countries signed a treaty of friendly cooperation and good neighborliness (May 22, 1992). Polish exports to Russia increased considerably, without compensating for the massive gas imports. However, as early as 1993, Russia expressed its opposition to Poland’s entry into NATO. In conversations with his American counterpart, Boris Yeltsin was so bold as to ask for Europe4. He had to give up. Russia agreed to sign a “founding act” with NATO (27 May 1997). In return for this privileged partnership, it no longer opposed the entry of Poland, the Czech Republic and Hungary into NATO. This should be enough to put an end to the Moscow urban legend that the Allies did not keep their promises to Russia.5

Despite the development of trade relations between Poland and Russia, security issues quickly took over. As early as the 2000s, Poland was concerned about the militarization of the western part of Russia, the large-scale “Zapad” military maneuvers, the deployment of Iskander missiles in the enclave of Kaliningrad (formerly Königsberg), and more generally about Russian geopolitical revisionism expressed in the “near abroad” doctrine. Since then, Vladimir Putin’s speech on the “Russian world”, delivered during the manu militari reattachment of Crimea (March 18, 2014), has given more scope to this ambition.

To counterbalance Russian power, Polish leaders rely first on U.S. engagement in Europe and the vitality of NATO. Of course, Russian military aggression in Georgia (2008) and Ukraine (2014) reinforced this tropism. At most, the support for the “European defense” project is aimed at preserving Polish diplomatic positions within the European Union and providing a “spare tire”. Significantly, it was Poland that hosted the summit at which it was decided to strengthen the “forward presence” of NATO, in Central and Eastern Europe (Warsaw Summit, July 8-9, 2016).

This geopolitical investment in the transatlantic system (US-Polish relations and NATO) is accompanied by a notable military effort. The Russian threat on Europe’s eastern borders and the obsolescence of the national armed forces led Warsaw, as early as 2013, to design large-scale investment programs to modernize its military apparatus. The Polish government’s commitment in 2017 to mobilize an additional 45 billion euros over the next 15 years, the creation of the Polska Grupa Zbrojeniowa cluster, which brings together 60 defense companies, as well as the increase in military personnel since 2015 (144,000 men compared to 95,000 in 2015) place Poland in the group of countries that contribute significantly to the rearmament of Europe6. The defense budget there exceeds 2% of GDP.

At the same time, Poland is expanding its diplomatic reach. On the Baltic-Black Sea axis, its regional policy makes it an emerging power, a guarantor with its neighbors and allies of stability in medieval Europe (Mitteleuropa). To be sure, the Visegrad group (the V4) is not as coherent as it is made out to be. Formed in 1991 to prepare for the entry of Poland, Hungary and Czechoslovakia into the Euro-Atlantic institutions, this group makes it possible to defend common positions within the European Union and to distinguish itself from the Franco-German duo, particularly with regard to migration policy. The four founding countries also signed a military pact: the Central European Defense Cooperation (March 14, 2014).

Yet, the Polish perception and approach to Russia is not fully shared by its Central European allies, notably Viktor Orban’s Hungary, marked by philo-Putinism and ambiguous on Ukraine (see the issue of Hungarian-speaking minorities, in Ukrainian Subcarpathy). On the other hand, the Three Seas Initiative, launched in August 2016 on the proposal of Poland and Croatia, has a certain amplitude7. While this regional cooperation is focused on the development of infrastructure between the Baltic, Black Sea and Adriatic, the area covered corresponds to the “Poland-Lithuania” of past times8. Supported by the United States, the Three Seas Initiative should develop its energy dimension. From the Polish point of view, the issue is broader and this initiative prefigures a “Jagellonian Europe”9.

Poland is also involved in other diplomatic “formats” with limited and circumscribed objectives. Inaugurated in 1991, the “Weimar triangle” is a forum that brings together Paris, Berlin and Warsaw. Since Poland’s entry into NATO and the European Union, this “triangle” has lost its importance; the last meeting of the foreign ministers of the three countries took place about ten years ago. Established in 2020, the “Lublin Triangle” brings together Poland, Lithuania and Ukraine, with a dual objective: to support Kiev’s candidacy in Euro-Atlantic forums and to promote the development of the Three Seas Initiative. In the wake of this, an “associated trio” between Poland, Georgia and Moldavia was created (2021). Finally, a “Cooperation Triangle” between Poland, Ukraine and the United Kingdom could be founded10.

In sum, it appears that Poland, because of its strategic situation and in a context of high tensions, because of its own weight and its foreign policy, should not see its importance reduced. The country is no longer the “ex-PEP” (planned economy country) which, a generation ago, began a political and economic transition in which it tried to be the best student. Of course, Poland is not in a position to take over European leadership from France and Germany. At most, with the support of the Visegrad group and a few other Central and Eastern European countries, it has the power to obstruct within the European Union.

The fact remains that Poland has real diplomatic and military clout in “Middle Europe”, on NATO’s eastern flank, as it is cautiously called (a “flank” that has once again become a line of East/West opposition). And if Vladimir Putin chose the military option in Ukraine or launched so-called “hybrid” operations against certain European countries, this “flank” would become a front, with Poland as a geostrategic bastion and support point. The effectiveness of the “NATO” political-military process, the defense of Europe and the geopolitical balance in the Western world require that Poland’s place and role be reconsidered: it should join a future Euro-Atlantic “Fifth”.