The Russian military threat to Ukraine and, by extension, to Mitteleuropa (Central and Eastern Europe, sometimes called “median”) focuses the attention of diplomats and strategists on the Baltic-Black Sea isthmus and the Pontic Basin. However, it should not be forgotten that the so-called Mitteleuropa covers the entire area between the Baltic, the Black Sea and the Adriatic. The Balkans (South-East Europe) partly overlap with this area.

Two decades after the wars that tore apart the former Yugoslavia, the regional order established by the West in the 1990s is proving fragile and threatened. As head of the Serbian Republic of Banja Luka (the historic capital of Krajina, in Bosnia), Milorad Dodik is challenging the future of Bosnia-Herzegovina, with possible dramatic consequences in the region. There is no doubt that Vladimir Putin and his followers, nostalgic for Soviet “oblique strategies,” are trying to use this troublemaker as a lever to take revenge for the Kosovo war (1999) and to push their advantage. It is therefore important to draw up the geopolitical landscape of the Balkans, a zone in which the spectre of war lurks.

Between the Adriatic, the Black Sea and the Eastern Mediterranean

The Balkans are a geopolitical entity located between the Adriatic Sea, the Eastern Mediterranean and the Black Sea. They stop where the influence of the Orthodox Church ceases, on the Dalmatian coast (Croatia) in the west, in Vojvodina (Serbia) and Transylvania (Romania) in the north. This peninsula is part of what German geographers called Mitteleuropa, the “middle Europe” that stretches from the Baltic Sea to the Black Sea and the Adriatic. With an area of about 400,000 km², the Balkan Peninsula is mountainous and compartmentalized. It includes a dozen peoples and nine states, including Kosovo. This complex political, ethnic and linguistic geography is the result of a tormented history, marked by the succession of empires, the Balkans constituting both a geopolitical crossroads and a refuge for local populations who have preserved their particularities. These territories belonged to the Byzantine Empire and then, during the 14th century, came under Ottoman domination: “Balkans” is a Turkish word meaning “mountains”. After having extended to the north, in the Hungarian plain, the Ottomans even threatened Vienna (see the sieges of 1529 and 1683). The counter-offensive of the Austrian Empire began at the end of the 17th century and, in the two centuries that followed, the Ottomans constantly lost ground. The peoples who took refuge in the mountains then became historical actors, their elites seizing the principle of nationalities to achieve political existence in the form of a nation-state.

The great powers of the 19th century, Russians and Austrians in particular, interfered in the struggles of the Balkan peoples against the Ottomans and competed to take over from the “Sublime Porte”, while ensuring in the case of the English and the French that the straits remained Turkish, in order to counter the Russian strategy of the “hot seas” (Crimean War, 1853-1856). The formation of states with national pretensions in Serbia and Bulgaria (1878), on territories where nationalities were entangled, allowed Russia to foresee a breakthrough towards the Mediterranean Sea (the Berlin Conference, in 1878, thwarted this ambition, which was based on the constitution of a pro-Russian Great Bulgaria). In the years preceding the First World War, Germany developed its influence within the Ottoman Empire (see the construction of the Baghdad-Berlin railway or Bagdadbahn). This set of intertwined conflicts constitutes the famous “Eastern Question”, punctuated by the so-called “Balkan Wars” (see those of 1912-1913).

At the end of the First World War, the disintegration of the Ottoman Empire and that of the Austrian Empire renewed the local geopolitical situations. Allies of the victors, the Serbian leaders obtained a “kingdom of Serbs, Croats and Slovenes” which included the southern Slavs. Despite the use of Serbo-Croatian, this “Yugoslavia” was weakened by strong ethnic and religious opposition as well as disparities in development. Dislocated during the Second World War, Yugoslavia was then reconstituted under the leadership of Tito. The conflict with Stalin and the expulsion of Yugoslavia from the Cominform (1948) deprived the USSR of access to the Adriatic Sea and the mouths of Kotor. While benefiting from discreet Western support, Tito committed his country to the path of “non-alignment” (tripartite meeting in Brioni, 1956; Belgrade conference, 1961). 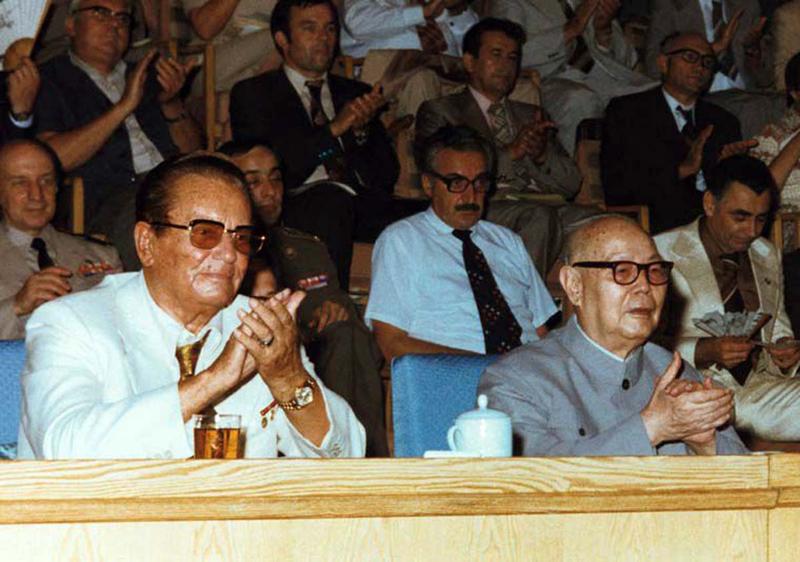 A Western “protectorate” challenged by Moscow

When Tito died in 1980, Yugoslavia became balkanized. In 1991, the proclamation of independence by Croatia and Slovenia was followed by a war with Serbian troops in Belgrade. the conflict then moved to Bosnia-Herzegovina, a federal republic that constituted a sort of mini-Yugoslavia, and then to Kosovo. These wars (Bosnia-Herzegovina, 1992-1995; Kosovo, 1999) revived the theme of Russian-Serbian friendship and Orthodox solidarity, even though Boris Yeltsin had neither the will nor the means to engage in a showdown with the West on this geopolitical issue. The situation also opens up geopolitical opportunities for Turkey in formerly Ottoman lands. After the imposition of peace in Bosnia-Herzegovina (Dayton Agreement, 14 December 1995) and in Kosovo (March-June 1999), troops were deployed under the NATO flag to stabilize the region. Kosovo was placed under a sort of Western protectorate. With the support of the United States and NATO, the European Union and its member states embarked on a “nation-building” operation that aimed to eradicate the roots of the conflicts by promoting the rule of law and economic development. As for Yugoslavia, where Slobodan Milosevic was ousted from power the year after the Kosovo war, it was reduced to Serbia, with Macedonia (1991) and Montenegro (2006) gaining independence. In 2008, the former province of Kosovo, with a large Albanian population, opted for independence. The fact is recognized by a large part of the international community, but the cause of the Serbs of Kosovo remains powerful in Serbia and Russia.

Since the end of the wars in the former Yugoslavia, Western diplomacy has somewhat neglected the Balkans. It is true that NATO has welcomed Bulgaria and Romania (2004), Croatia and Albania (2009), and then Montenegro (2017), which ensures its control over the entire northern Mediterranean coastline, from Gibraltar to the Turkish-Syrian border. If the case of Macedonia remains unresolved, it is because of a long dispute with Greece over the name of this former Yugoslav republic. This dispute was settled in 2018, when the country took the name “Republic of North Macedonia”. Romania and Bulgaria (2007) as well as Croatia (2013) have joined the European Union. However, the enlargement of the EU to the “Western Balkans” deprives Brussels of a lever to encourage reforms and the resolution of geopolitical problems in Macedonia, Bosnia and Herzegovina, Serbia and Kosovo. Economic stagnation, organized crime and the fragility of the Balkan route, as well as nationalist “passions”, worked by an active Russian diplomacy that is irreducible to its energy component, are likely to degenerate, with serious repercussions on the geopolitical stability of the established Europe.

It should be remembered that Russia and Serbia are linked by a “strategic partnership”, with Belgrade also enjoying observer status in the CSTO (Collective Security Treaty Organization). After the Russian push in Ukraine (Crimea, Donbass) and Moscow’s return to the Mediterranean East (Eastern Mediterranean, Middle East), the Balkans could once again become a zone of high tension. Thus, the future of Bosnia-Herzegovina, an amalgamation of a Bosnian-Croat federation and a Serbian republic, depends on the decisions of the Serbian nationalist leader, Milorad Dodik, spurred on by Moscow. On December 10, 2021, Dodik had the Banja Luka parliament adopt resolutions that would imply an exit from Bosnian institutions within six months, that is, by June 10. He threatens to recreate Bosnian-Serb institutions parallel to those of Bosnia-Herzegovina, including an army.

Beijing at the helm

Geopolitical analysis must also take into account Beijing’s growing interest in the Balkans, a fact that further highlights the neglect of this region by European capitals. The public debt crisis in Greece and the economic recession have created a vacuum, partly filled by People’s China. In 2016, Chinese shipowner Cosco invested heavily in the port of Piraeus, and Beijing undertook to finance the modernization of the Piraeus-Budapest rail route, via Belgrade, to Central European markets. At the same time, a number of Chinese companies are investing in local institutions, including an infrastructure research center in Sofia, which is strengthening its influence. In truth, the Chinese approach is broader. In 2011, Budapest hosted an economic forum, the “16 + 1”, which brought together the People’s Republic of China and 16 Central and Eastern European countries. The following year, in Warsaw, this grouping was institutionalized and is regularly convened under the aegis of China, a dispenser of capital in what is sometimes compared to a new Eastern bloc. Greece subsequently joined this “16+1” (2019), a forum that Lithuania has left (2021).

The opening of a Chinese “Balkan corridor” and the related investments are part of the OBOR program (“One Belt, One Road” launched in 2013, since renamed BRI (Belt and Road Initiative), i.e. the “new silk roads”. The ins and outs of the link between Piraeus and Budapest, and even more those of the “16+1” forum, go far beyond geo-economics. Diplomatic influence and political lobbying are the dark side. For example, when the Permanent Court of Arbitration in The Hague ruled that the People’s Republic of China did not have “historic rights” over most of the strategic waters of the South China Sea (2016), Hungary, Greece, Croatia, and Slovenia helped tone down the tone and scope of the EU’s joint statement on the issue. Also at stake are the mechanisms for monitoring Chinese investments, in strategic sectors, which the European Commission, Paris and Berlin intend to strengthen. In short, the Balkan region, already the object of rivalries between Russia and the West, is seeing the assertion of a new geopolitical actor anxious to develop its multiform influence. To this must be added Turkey, which, as a member of NATO and associated with the European Union, has its own geopolitical game in the region. Its presence is particularly visible in Sarajevo, Bosnia-Herzegovina and Albania. At the same time and counter-intuitively, Ankara is taking care to develop its political, diplomatic and commercial relations with Serbia.

In the order of priorities, the fate of Bosnia-Herzegovina is the most worrying. The separatist project of Serbian nationalist leader Milorad Dodik, supported by Moscow and other capitals, threatens to set the “Balkan powder keg” on fire again. His geopolitical project is reminiscent of that of Radovan Karadzic, his predecessor at the head of the Serbian Republic of Banja Luka, when Slobodan Milosevic was implementing his Greater Serbia project from Belgrade. This project follows the same logic, the formation of homogeneous ethnic entities, with all that this implies for territories historically composed of various ethnic groups. Notwithstanding the diplomatic manoeuvres of Aleksandar Vucic, the President of Serbia, who apparently wants to get closer to the Euro-Atlantic institutions, the President of the Serbian Republic of Banja Luka and many of his compatriots are not insensitive to such a project.

Vladimir Putin, whose guiding principle is to destroy the post-Cold War international order in order to reconstitute the geopolitical system of “Russia-Soviet”, is also very attentive to the changing situation. On January 9, a militia from the Night Wolves (a club of Russian nationalist bikers) was in Banja Luka, ostensibly demonstrating the preferences of the master of the Kremlin. And this in the presence of the Russian ambassador and diplomatic representatives of the People’s Republic of China. The German Christian Schmidt, High International Representative in Bosnia, can rightly speak of an “existential threat” to the future of this confederation. Beyond the fate of the latter, the Balkans could be the scene of a future diplomatic confrontation with Russia.

The international crisis provoked by the Kremlin’s pressure on Ukraine, considered as a pseudo-state doomed to destruction, has the virtue…

In Russia, the election is a dirty game. The whole process is controlled by the bureaucracy, the information system, and intelligence services.