Russian soldiers on the streets of Almaty. Photo : The Russian Ministry of Defense

The dispatch of troops to Kazakhstan from the Russia-led Collective Security Treaty Organization (CSTO, including Russia, Kazakhstan, Belarus, Armenia, Kyrgyzstan and Tajikistan) is a game-changer for the entire Soviet space and probably beyond.

The statutes of this organization, founded in 2002, say it can send troops to respond to external aggression against any one of its members. That’s why the term “international terrorists” has been brandished. It was striking to see the prime minister of Armenia, Nikol Pashinian - otherwise best known for having been the figurehead of the 2018 “Velvet Revolution”, but finding himself obligated to the Russian regime since the end of the war with Azerbaijan — take up this grotesque rhetoric. Incidentally, the very notion of an external threat or aggression has changed significantly in Russia and some of its neighbors in recent years. This happened in particular when in 2012 Russia introduced the term “foreign agent”, a label which has been slapped onto NGOs, media outlets and individuals whose activities do not tow the government line and who (sometimes only supposedly) receive assistance from abroad.

The official discourse on “color revolutions” popular uprisings against corrupt dictatorial regimes, has followed the same logic. Color revolutions, such as the two Ukrainian revolutions of 2004-2005 and 2013-2014, the Georgian revolution of 2003, or the 2020 uprising in Belarus, have systematically been painted in Russia as the result of western, mainly American, undermining. To this day, despite two presidential elections and as many parliamentary elections in Ukraine, which were held in a perfectly democratic manner, Russian propagandists and officials talk about a regime that was the result of an illegitimate coup. Meanwhile the Kremlin systematically supports dictators in different parts of the world and comes to their rescue, in keeping with its own logic that they are fully “legitimate”, like Bashar al-Assad or Nicolas Maduro.

Here’s what’s changed: until now, with the exception of Syria, the Kremlin avoided providing direct and open military support, and would instead deploy unidentified “green men” in the Crimea, Wagner and other “volunteers” in the Donbass and in Africa, military advisers to Maduro, etc. By responding with lightning speed to the Kazakh president’s call for help, the CSTO, which is entirely dominated by Russia, has crossed a new threshold. Despite president Tokayev’s clumsy claim that as many as 20,000 foreign “terrorists” had come to destabilize Kazakhstan and overthrow the regime, no trace of these “Islamists” and “terrorists” has been found. Tokayev explained that these “terrorists” had either picked the bodies of their killed comrades off the streets or stolen those bodies from morgues, so that they couldn’t be identified.

There is no question that a popular revolt broke out after the price of gas had doubled, and against the backdrop of galloping inflation and a repressive and corrupt regime. Very quickly, demonstrators demanded the departure of the regime’s top officials: President Tokayev and the “father of the nation” Nazarbayev, as well as his family, who to this day hold the reins of the national economy. The rapid ouster of the latter also demonstrated the importance of inter-clan rivalries for control over the country. It is not surprising that peaceful demonstrations in some places turned violent and with marauding, as can also happen in western countries. What is far more surprising and showed the determination of the uprising is that the police and several army units seem to have fraternized with the revolting people. Hence the desperate call for help from Tokayev who, without outside intervention, would probably have been overthrown. 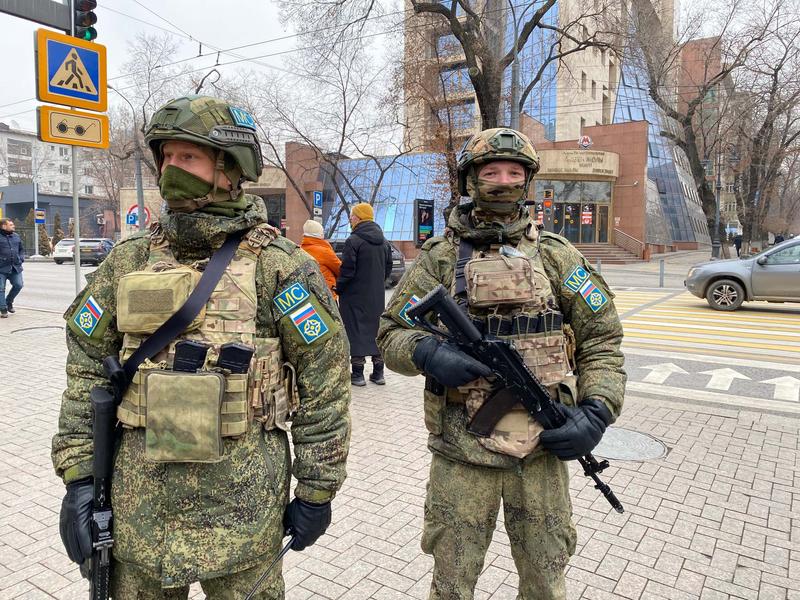 Russian soldiers on the streets of Almaty. Photo : The Russian Ministry of Defense

Putin massively supported Tokayev. Apart from a few hundred troops from other CSTO countries, the majority of the troops and equipment brought in were Russian. Within two days, according to unofficial sources, nearly 19,000 Russian special forces and airborne troops and nearly 5,000 tons of equipment would have been sent to Kazakhstan. One lesson to draw is that from now on, there will no longer be any difference between external and internal threats. According to the new Putin doxa, every domestic threat is necessarily fomented abroad and must be suppressed.

What does this mean? Firstly, Russia will no longer tolerate a “multi-dimensional” development of Kazakhstan, in which Nazarbaev, and Tokayev after him, skilfully played both sides of the fence, moving between Russia, Turkey, China and the West. There are speculations in the Russian press that a Russian military base will remain in Kazakhstan after the departure of the bulk of the troops, to protect the Baikonur cosmodrome and the uranium mines. But this may prove to be superfluous: Tokayev, who has probably become very unpopular after having ordered the firing of live ammunition at demonstrators, will now be a lifelong servant of Vladimir Putin. His power will literally be based on Russian bayonets, depriving the Kazakh people of any possibility to take their destiny into their own hands.

Secondly, the CSTO now seems set to play the role of the Warsaw Pact, which maintained Russian domination over the countries of Eastern and Central Europe. This is a very bad omen for other former Soviet republics. Even if not all of them are members of the CSTO, the leadership of this Moscow-dominated organization will always be able to declare that this or that country poses a threat to the security of a CSTO member. It’s a narrative that Alexander Lukashenko can easily resort to if his power system were to crumble. From the very start of the protests in his country, triggered by his fraudulent re-election, he took pains to say his opponents were all in the pay of the Americans, the Europeans, NATO and the CIA.

The CSTO is thus emerging as a new instrument for Vladimir Putin in the reconquest of the post-Soviet space and in his strategy of supporting the worst dictatorships. This new reality must be acknowledged by the West — not minimized. The worst mistake would be to imagine that what has just happened in distant Central Asia will remain without any consequences whatsoever for the stability of the European continent, which is already fraught with challenges, and for the defense of freedom which Westerners must live up to.

Faced with the now massive war launched by Putin against Ukraine, it would be disastrous to give the head of the Kremlin…

Raman Protasevich was kidnapped by the Belarusian security services in an act of air piracy that must be considered a terrorist action.