Meeting in Riga (Latvia) on 1 December 2021, representatives of NATO member countries reaffirmed their support for Ukraine. Indeed, tensions are rising on the Russian-Ukrainian borders, with the increase in Russian military resources raising fears of a new tactical strike on a portion of Ukrainian territory, or even an offensive with broader objectives.

Some will explain that this is not in Vladimir Putin’s “interest”, but the question is precisely how he defines and identifies Russia’s interests. Finally, history is not reducible to a mechanics of interests: it is the effect and consequence of a dialectic between processes, i.e. logics inscribed in time (globalization for example) and drama. Passions and errors of judgment, at the origin of erroneous decisions, have more than their share in the history of wars and conflicts.

The primacy of ties with Russia

The fact remains that Ukraine is not a member of NATO, and there is still no solid Euro-Atlantic consensus on its eventual membership. Thus, the Allies’ collective support for Kiev has limits that should not be ignored. On the other hand, there is nothing to prevent NATO member countries from expanding and increasing their bilateral relations with Ukraine, especially in the field of military-industrial cooperation. This is the choice made by Turkey in recent months. Not without concerns in Paris and Berlin, which, discreet when the artillery of pro-Russian militiamen bombed Ukrainian positions, expressed their concern after a Turkish-made Ukrainian drone struck the said militiamen in return. However, it is the “Russia first” policy led by France and Germany, based on false political-diplomatic expectations, which leaves Turkey all the room to strengthen its relations with Ukraine and develop its influence in Eurasia.

In the Black Sea basin, Turkey has not previously been indifferent to the fate of Ukraine, but it has long favored Russia. After the long face-off of the Cold War, Ankara and Moscow experimented with a kind of condominium in the Pontic Basin (the Black Sea was once called the Euxin Bridge). Placed at the heart of their energy partnership (see the Blue Stream and, more recently, the Turkish Stream gas pipelines), the Black Sea has thus become the site of a regional naval and maritime cooperation dominated by these two riparian powers (see the Blacksea Force). In order to strengthen its own position, Turkey has even taken care to limit the role of NATO as such, with the complicity of France, which had its own reasons (limiting the role of NATO for the benefit of a future European defense). Despite the establishment in 2011 of a high-level Turkish-Ukrainian “joint committee”, Ukraine was thus relegated to the background. In the line of sight of Turkish diplomacy in the 1990s, a major project, supported for a time by the European Union: an Organization of the Black Sea Economic Cooperation (BSEC). The aim was therefore to go beyond Russia alone.

Since the manu militari reattachment of Crimea to Russia in February 2014 and the ensuing war in Donbass, Turkish-Ukrainian relations have gradually taken a new course, which certainly did not prevent the formation of a kind of “brutal agreement” (Marie Jégo) between Ankara and Moscow, experienced in the Syrian theater from 2016. The effects of this rapprochement were very concrete: see the Astana process, the Turkish Stream and the sale of Russian S-400 to Turkey. However, it is important to understand that Russian territorial ambitions and the modification of the balance of power in the Black Sea basin to its advantage are detrimental to Turkey’s security and power interests in the region.

Moreover, Turkish-Russian tensions in other theaters (Syria, Libya, the South Caucasus), although contained by the aforementioned “brutal agreement”, have repercussions in the Black Sea basin. All the more so since Turkey is facing a containment enterprise, from the eastern Mediterranean to the Arabian Gulf (see the rapprochement between Greece, Cyprus, Israel and the United Arab Emirates, with the support of France); Ankara’s ambitions could therefore be redeployed towards the Black Sea, to the detriment of cooperation with Russia. Finally, the Turkish doctrine of the “Blue Homeland” and the question of maritime zones also have their extensions in this basin, all the more so as a gas deposit has been identified in Turkish waters. And the Istanbul Canal project could also be a source of new friction. This is what Turkish personalities and ideological currents in favour of an alliance with Russia are worried about. There is indeed a Turkish Eurasism whose influence seems inversely proportional to its political-electoral weight. 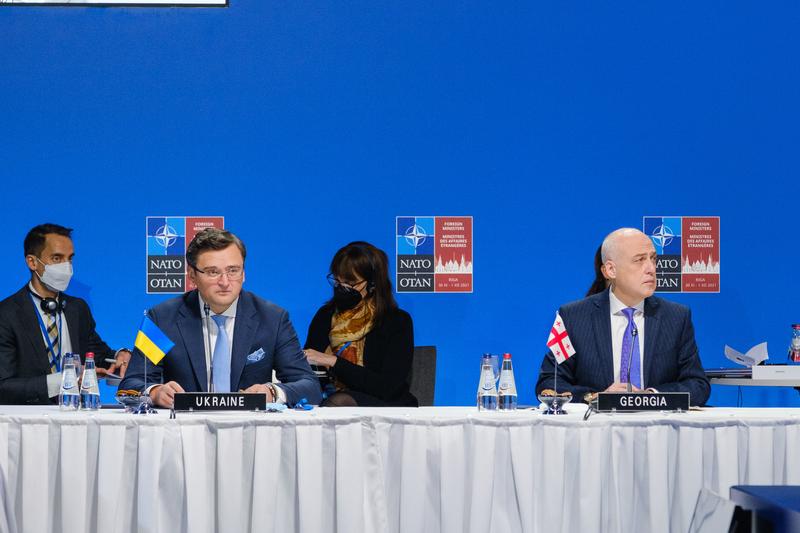 Ukrainian and Georgian Foreign Ministers Dmytro Kuleba and David Zalkaliani at the NATO summit in Riga on December 1, 2021 // nato.int

From 2014 onwards, Turkish-Ukrainian relations have therefore been tightened and intensified. With more drive than many European capitals, Ankara pointed to the illegality of the Russian occupation of Crimea; Turks are sensitive to the plight of the Crimean Tatars and the government provides assistance to those who have gone into exile (Turkey has a Tatar diaspora). Beyond the Tatar question, a multiform cooperation — political, economic and military-industrial — has taken shape in recent years. On the political level, contacts have developed and, during a visit of President Volodymyr Zelensky to Istanbul, against the background of Russian military maneuvers and intimidation on the borders of Ukraine, his Turkish counterpart gave him unequivocal support (10 April 2021). The same is true of the “Crimea platform”, a Ukrainian diplomatic initiative that will be concretized by a first summit in August 2021 (the issue is not to “forget” the illegal annexation of the Ukrainian peninsula).

Economically, trade is not at the level of the economic potential of these two countries, but the (uncertain) negotiation of a free trade agreement could double the amount (currently 5 billion dollars per year). However, it is worth noting the large number of Turkish companies operating in Ukraine, particularly in infrastructure construction, and the volume of direct investment they are making there. Finally, the flow of Ukrainian tourists to Turkey is not negligible and, given that Moscow regularly uses this lever to reach Turkish economic interests, these flows help to cushion the shock (see the new tourist embargo decided by Vladimir Putin in the spring of 2021).

On the military-industrial level, Ankara and Kiev are developing an active and mutually beneficial cooperation. We should mention here the delivery of Turkish Bayraktar TB2 drones, coupled with a partnership for the design and production of these machines (the delivery of 48 other drones is being negotiated). To put it simply, the Ukrainian engines from Ivchenko-Progress will allow Turkey to develop its drone program, which has been under European sanctions since the last war in Nagorno-Karabakh (autumn 2020); in return, Ukraine will have access to this technology and, at the same time, will be able to relaunch its aeronautics program. The delivery of Turkish drones is likely to change the situation in the Donbass, and will be accompanied by assistance in dealing with the electronic warfare waged by Russia and its local affiliates (jamming and sabotage of communications). Cooperation is also naval (training of the Ukrainian navy and joint exercises are planned), with industrial extensions such as the construction of Turkish corvettes in the shipyard of the Ukrainian port of Mykolaev.

In addition to the effective contribution of this military-industrial cooperation to the defense and security of Ukraine, and its effects on Turkish-Russian relations, Turkey’s assertion in the Black Sea basin must be placed in the broader framework of the balance of power in Eurasia and the geopolitical stakes in former Turkestan (from the eastern Caspian to Sin-Kiang/Xinjiang). It is known that the last war in Nagorno-Karabakh, in the autumn of 2020, strengthened the political, diplomatic and military ties between Turkey and Azerbaijan, officially presented as forming a single nation (“One nation, two states”). Notwithstanding the Kremlin’s geopolitical manipulations and diplomatic activism, Turkey has laid the groundwork for a grand Eurasian strategy. 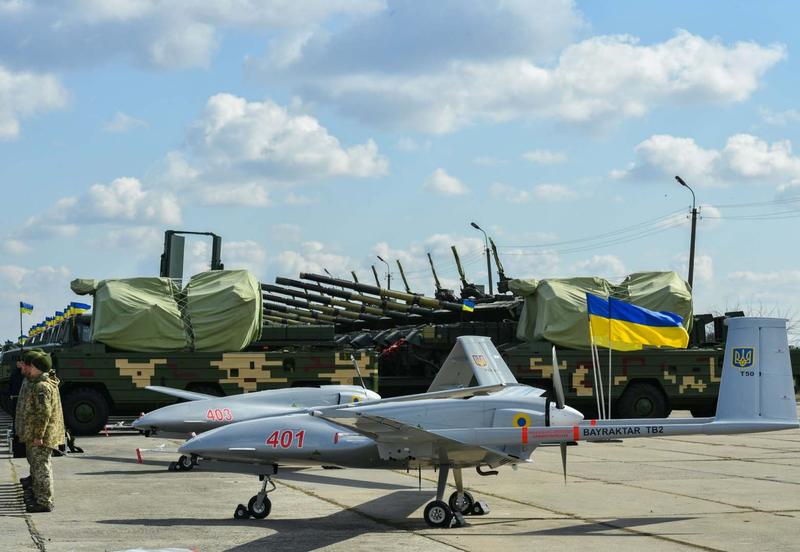 One of the Bayraktar TB-2 drones supplied to Ukraine by Turkey // president.gov.ua

In fact, the focus must be broadened even further. Despite the obstacles posed by Russia, which wants to be the “sponsor” of peace in the South Caucasus, Ankara intends to open a logistics corridor through the Caucasian isthmus, towards the Caspian basin and the republics of former Soviet Central Asia. The long-term objective is to constitute a Turkish pole in this “milieu of empires”, in the heart of Greater Eurasia, which a Sino-Russian agreement on the “new silk roads” (the Belt and Road Initiative) could make happen.

Driven by its own goals, Turkish diplomacy has recently promoted the Turkic Council, which at its last summit became the “Organization of Turkic States” (November 2021). Overshadowed in the media field by the neo-Ottoman theme and the Islamic references of Recep T. Erdogan, it seems that Panturanism still has some influence. As the rivalries between the West and the Sino-Russian tandem are exasperating across Eurasia, this dynamic should not be overlooked.