“The vaccination, the insertion of microchips, the number of the beast.” Image from a conspiratorial YouTube channel

The Covid crisis has demonstrated the price that the Russian population has to pay for the policy that the Kremlin has been pursuing for years, favoring passions over reason, obscurantism over expertise, and repression over free debate of ideas. But there are converging indications that this policy could have repercussions on its very instigators and compromise a number of their pet undertakings.

Today, the Russian government is doing its utmost to impose vaccination on the overwhelmingly reluctant Russian population. It has to face the muted and multi-faceted opposition of the “deep people”, of this electorate of President Putin whose docility seemed to be a given for a long time. The outcry caused by the plan to introduce QR codes has surprised the authorities. It is clear that Putin’s regime, which is so quick to eradicate all liberal opposition turned towards the West, is reluctant to confront fundamentalist resistance and only cautiously takes the risk of doing so.

The State Duma is considering controversial laws on the full introduction of QR codes in Russia. These laws are currently being discussed in regional parliaments. The newspaper Novaya Gazeta has investigated the opposition to these measures. It turns out that the ideology of this protest is formulated by the Orthodox — hierarchs, priests and parishioners. A large gathering of Orthodox parishioners was held on November 21 in Moscow’s Izmailovo hotel, in an officially rented hall, chanting the slogan “Stop digital fascism!” without any sanitary measures being applied. The informal association of these activists has several thousand followers and branches in the regions of the Russian Federation.

This movement has deep roots. The introduction of barcodes caused a revolt among Orthodox fundamentalists during the Yeltsin era, and the hierarchy of the Orthodox Church had to intervene to calm the situation. Its official position on these issues was formulated in the last years of the patriarchate of Alexy II by the Synodal Theological Commission: a person cannot come under the domination of the Antichrist “mechanically”, without “conscious betrayal of Christ”, therefore bar codes are not the seal of the Antichrist. However, the fundamentalist Orthodox have not disarmed. Serguiy (Romanov), the influential head of an Orthodox monastery in the central Urals, who was sentenced on November 30 of this year to 3.5 years in prison, has thundered from the pulpit “against numbers [digitization]” during 20 years. Gradually, these orthodox movements have become closer to and partly intertwined with the associations of “citizens of the USSR” who also reject documents with microchips. Law enforcement agencies discovered that the passports of some believers could no longer be deciphered by electronic devices: the ultra-Orthodox had discovered a way to “neutralize” the chip by heating the passport in a microwave.

In one of the episodes of his program The Exorcist, the director Nikita Mikhalkov, who is close to the Russian Orthodox Church, insinuated that the famous “chip” would be introduced into the human body through vaccination. Russian television did not allow the episode to be broadcast, but it became a hit on the Internet. Moldovan Bishop Marchel (Mihaescu) of Balti and Falesti (the Moldovan Orthodox Church is canonically attached to the Moscow Patriarchate) introduced in May last year in the official discourse of the Orthodox Church (at the episcopal level), the conspiracy theories according to which Bill Gates planned to use vaccines to inject traceable microchips into the world population or according to which 5G technologies were responsible for the deaths attributed to covid. A year later, the patriarch promoted this zealot to the archdiocese. Marchel did not give his blessing to his flock to get vaccinated, because “instead of a vaccine, people get a chip implanted.” Soon, this position was officially reiterated by the Synod of the Orthodox Church of Moldova.

The “Human Rights Center” of the World Council of the Russian People, an organization created in 1993 to promote the revival of Russian patriotism based on Orthodoxy, kowtowed the anti-vaxxers by asking the Attorney General and the head of the Investigative Committee to open an investigation into the involvement of the Bill and Melinda Gates Foundation in the pandemic. This fund, which actively finances the development of vaccines, is suspected of allegedly profiting from global vaccination.

This summer, Bishop Porfiry, the head of the Solovki monastery, the vicar of Patriarch Kirill, sided with the anti-vaxxers. As for Metropolitan Mark of Ryazan (Golovkov) (formerly Kirill’s deputy in the Department of External Church Relations), he calls the vaccine “an experiment from which people can die.” in Yekaterinburg, on the occasion of this year’s celebration of “Tsarist Days” [the commemoration of the assassination of the imperial family] (July 10-21), two metropolitans and two bishops of the Russian Orthodox Church led a procession of several thousand people, bringing together anti-vax Orthodox and anti-globalization activists, although the governor urged them to refrain from the demonstration. Bishop Savva (Tutunov), the number 2 in the Patriarchate’s administration, also takes a stand in the name of defending human rights: “The QR code,” he writes on Telegram, “is a universal instrument of control that makes total restrictions possible… [It] makes it possible in the future to collect voluminous data on every step taken by everyone… it makes it possible to impose a behavior on people or to forbid them certain actions”. 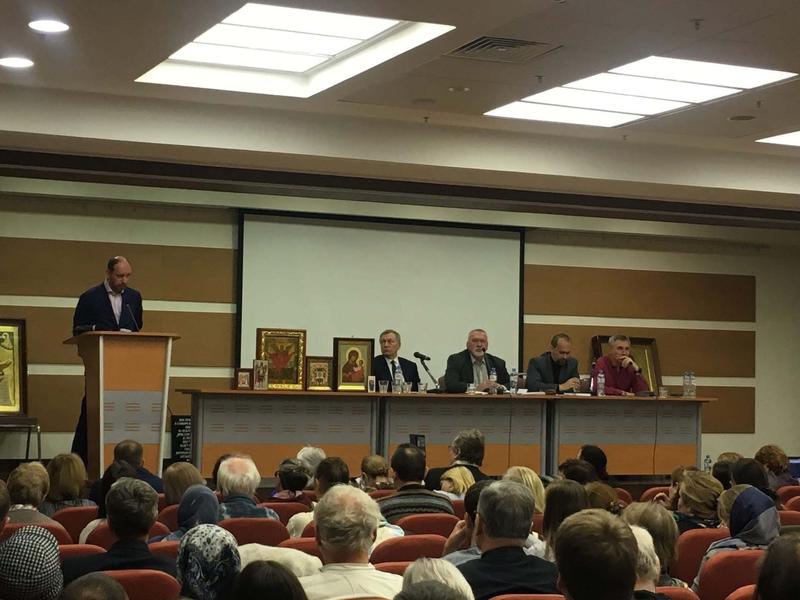 Faced with this rebellion of the friendly ultra-Orthodox, the Kremlin has long hesitated to act, trying to pussyfoot around. Speaking on May 18, 2021, Patriarch Kirill called “to take into account the interests and rights of those of our fellow citizens who refuse to use any electronic system.” The concerns of “those who value the right to confidentiality and privacy and who do not want their personal information to be used for commercial purposes” were legitimate in his eyes. But from November onwards, when Russia’s share of the world’s daily death toll from Covid reached 25-50%, the Kremlin forced the clerics closest to the ruling elite to step up. Each has his own audience.

Metropolitan Tikhon (Shevkunov), who has the ear of President Putin, is addressing Russian masses, urging them to wear the mask. Metropolitan Hilarion, head of the patriarchate’s foreign relations department, speaks on the federal channel Russia 24 and addresses mainly civil servants and a public that is fairly indifferent to religious matters. Hilarion dutifully fulminate against the “anti-vaxxers”, threatening them that they will have to pray all their lives to atone for their sin, the death of the people infected by their fault. It goes without saying that Hilarion is an ardent supporter of the QR code: according to him, the most extreme measures are necessary when the country loses “a whole regiment” every day. Hilarion turns the covidosceptic conspiracy theory on its head: “There are forces abroad that are interested in our gradual disappearance, so that they can take over our land. I am deeply convinced that the virus did not come to us by chance, and this active campaign against vaccination, against QR codes, against any protective measures for our population, which is conducted on the Internet and in channels on Telegram, is also directed from abroad. Unfortunately, many of our citizens, perhaps without realizing it themselves, become instruments in the hands of these forces.”

The Kremlin has also sent off to the salt mines the Association of Orthodox Experts of the Russian Church, whose aim, according to its director Kirill Frolov, is to “strengthen the symphony and the deep spiritual bond between Patriarch Kirill and President Putin”, to give “full support to His Holiness Patriarch Kirill and his project of the rechristianization of the historical Rus [i.e., including Ukraine]”. The association has become notorious by advocating for the cancellation of concerts by singer Madonna in St. Petersburg, urging soccer fans not to swear in stadiums so as not to “stir up demons,” calling for exemplary punishment of members of the Pussy Riot group, and comparing President Putin, head of government Dmitry Medvedev, and Patriarch Kirill to the Holy Trinity. In 2013, the Association called for prayers for Vladimir and Lyudmila Putin after their divorce and recommended “not to give anti-Russian forces the opportunity to gloat and pose as judges.”

At a meeting of the Izborsk Club [conservative Putin think tank] in 2015, Kirill Frolov painted a picture of the holy Russia of the future with a clericalized people, a powerful military and industry, Orthodox computers and Mars as the canonical territory of the Orthodox Church, the planet having been cleansed of sect members. In 2015, the Association called on the Ministry of Culture to ban Andrey Zvyagintsev’s film Leviathan (2014) and create “an Orthodox Hollywood.” In addition, representatives of the Association regularly contact the Moscow Main Department of Internal Affairs [a branch of the Ministry of the Interior], the Prosecutor General’s Office, and President Vladimir Putin to complain about “budding opponents.” Today the Association is trying to reconcile, “under the portrait of the leader”, orthodox anti-vaxxers and supporters of vaccination, declaring reassuringly: “As long as Putin is in power, these [QR codes] are only black squares. But if Putin and the security forces are overthrown, then QR codes will become the globalist instrument in the hands of the Antichrist for our oppression”.

These blatant interventions by Orthodox figures ostensibly in the pocket of the Kremlin are stirring tensions within the Church. False notes are slipping into the “symphony” between the Orthodox Church and the authorities. Metropolitan Hilarion’s equation of opponents of vaccination with “foreign agents” does not go down well. The conservative commentator Mikhail Demurin bluntly warns the “collaborators” within the Church: “In the Russian Orthodox Church there are many honest hierarchs who understand that the people must be listened to and not referred to as ‘foreign agents’. And that one should not identify with the government: this can be costly, not everyone in Russia is close to the current government.” Here again the rhetoric of the Putin regime is turning against it.

Novaya Gazeta quotes Igor Kniazev, a political scientist and Lutheran bishop serving in the Moscow region, who links the discontent of believers with QR codes to the high eschatological expectations generated by Russian propaganda. “When you expect the end of the world, you don’t care about the continuation of the normal course of life,” he observes. As television constantly denounces the world conspiracy and the inevitable war, social pessimism and the expectation of a universal catastrophe grow. Russia being an atheist country, the majority, while claiming to be Orthodox, professes all sorts of superstitions that feed the propensity to adhere to the ideas of the imminent end of the world. Thus, the social protest, which in Russia cannot be expressed openly without danger, moves to the medical field and turns into a mass psychosis.

The European Parliament’s resolutions tend to be critical of Putin’s Russia. One of the most recent resolutions on Russia adopted at the end of April…