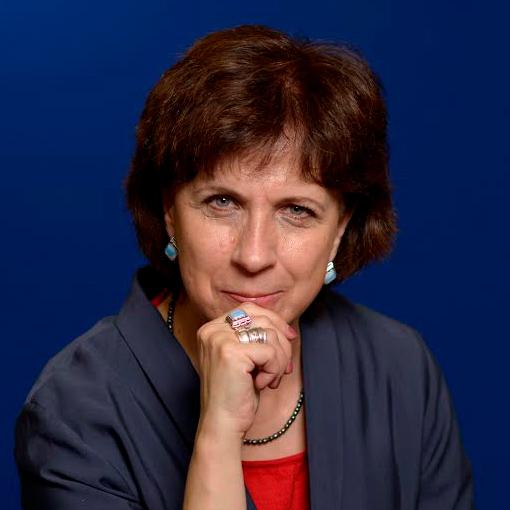 The practice of torture in prisons and penal colonies in Russia has long been widespread. Prisoners are tortured and raped by other prisoners at the request of the prison administration. Former prisoner and victim of abuse, the Belarusian computer scientist Sergei Saveliev, who has provided the website GULAGU NET with more than a thousand videos attesting to these crimes, has just arrived in France to seek political asylum. Is there any chance these practices will stop?

In early October 2021, Vladimir Ossechkin, founder of the website GULAGU NET, released a video of torture practiced in the prison hospital for tuberculosis patients in Saratov. Since 2015, Ossechkin lives in France, where he emigrated for fear of criminal prosecution in Russia. Having been granted political asylum, he continues his work, denouncing torture practices in Russian colonies and prisons. He and his colleagues have published videos of beatings before, but they have never had as much publicity as this time. Ossechkin says he was approached by a former inmate who, while serving his sentence in the above-mentioned hospital, had worked for the prison administration on video footage shot by hospital staff. Upon his release, he was able to pull out an archive of damning evidence.

The practice of torture in prisons and penal colonies in Russia has long been widespread. Prisoners are tortured and raped by other prisoners at the request of the prison administration. Those who complain about rights violations in the colonies are beaten and tortured. Typically, prison officials videotape the torture and warn their victims that if they do not denounce other prisoners or comply with their demands, the videos of their rape will be revealed. Being raped places a person in the lowest caste of the prison system, the so-called “lower caste”. The unwritten rules of Russian prisons forbid other inmates to shake hands, eat or talk with them. Since the video footage enters the database of the regional penitentiary department and, as human rights activists believe, goes all the way back to the Russian Federal Penitentiary Service (FSIN), it is clear that these actions by officers in some prisons and settlements are not the work of amateurs, but are a practice approved by prison authorities.

The publication of the video from the “Ossechkin archive” caused a strong reaction from the media and authorities in Russia. Several criminal cases were opened, the head of the federal penitentiary service in Saratov resigned and several officers of the Saratov penitentiary hospital were dismissed.

Vladimir Ossechkin says that the head of the FSIN, Alexander Kalashnikov, as well as other representatives of the penitentiary department responsible for “chain” torture should also be dismissed, as the archives contain videos of torture from other regions as well.

However, the deputies of the State Duma refused to create a parliamentary commission to investigate torture in Russian prisons; the FSIN itself requested the video archive of Vladimir Ossechkin for review.

It is possible that even these highly publicized videos of torture will not lead to any change in the practices of the Russian prison system; at best, some torturers will be punished: some will be imprisoned and some will be fired. But the system will not change.

The explanation is simple: the Russian prison system is built on violence. Evidence of humiliation, torture and extortion in Russian prisons and settlements has been piling up over the past two decades that Vladimir Putin has been in power. Every year, the prison system becomes more and more closed, the public control of human rights defenders authorized to visit prisons and colonies since 2008 is gradually reduced to nothing. Genuine human rights activists are gradually being replaced by former employees of the penitentiary system or people loyal to the authorities. In the minds of the Russian authorities, prison must be scary; Russian citizens, especially opponents of the regime, must be terrified of being in prison.

In 2007, human rights activist Alexei Sokolov made a film called Torture Factory, in which he described the mass torture in a detention center in Yekaterinburg, where prisoners were brought from all over Russia to extract confessions. This was the first time that documented evidence of horrific torture was made public.

Later, Lev Ponomarev, a human rights activist and head of the NGO For Human Rights, and his colleagues drew a map of the settlements where torture is practiced, based on prisoners’ testimonies. Last summer, I spoke with Malkho Bisultanov, a Chechen businessman released from the Omsk colony on that map.

This is what he says about his torture experiences: “When they torture you, they don’t let you sleep, you are tied up all the time. One hand cuffed at waist level and the other above the head. You can’t sit or lie down. You are naked on concrete all the time. If they feed you, they don’t take you to the bathroom. Or they don’t feed you at all. And everyone who comes in hits you, insults you, scolds you. This can go on for many, many hours. And then, if that’s not enough, they surround you, show you their dicks and tell you that they are going to rape you. They hang you up, smear your anus, shove things into you. They don’t say anything, they don’t care if you are Muslim, if you are Russian.”

Malkho Bisultanov complained of torture to the European Court of Human Rights. His complaint is still pending. 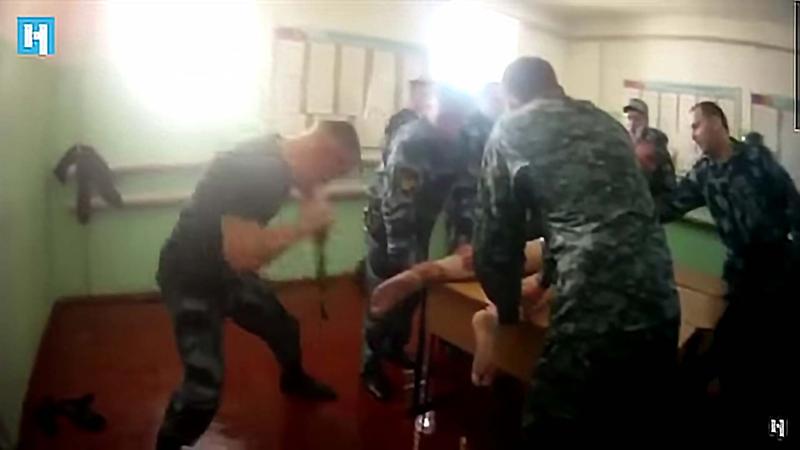 A prisoner being tortured in the IK-1 colony in Yaroslavl. Image from the video published by Novaya Gazeta.

In 2017, Irina Biriukova, a lawyer with the Public Verdict Human Rights Foundation, received a video of the beating of prisoner Yevgeny Makarov from the IK-1 colony in Yaroslavl, where her clients were imprisoned. The video shows the torture of Yevgeny Makarov for daring to verbally insult one of the officers because, during the search of his cell, he threw his mother’s letter on the floor.

The video was published by the newspaper Novaya Gazeta and criminal proceedings were initiated against the prison staff for “abuse of power”. The Russian Criminal Code does not provide for any punishment for torture, and this article is invoked whenever torture and humiliation of prisoners is proven. The officials of the penitentiary colony No. 1 who participated in the torture were arrested gradually, one by one, while the director and deputy director of the colony were placed under house arrest.

In their initial testimony at the investigation, several of the accused stated that the beatings of the inmates were filmed and that the memory sticks were regularly handed over to the management of the colony, which in turn sent them to the Yaroslavl department of the FSIN, as proof of the “educational work” carried out.

Later, the arrested officers recanted their statements. In November 2020, the court acquitted the former director of the prison and his deputy “for lack of evidence of a crime”. The others were sentenced to sentences ranging from three to four and a half years in prison. As a result, of the eleven people accused, with real evidence, of torturing prisoners, only three are currently in prison.

Have any serious conclusions been drawn within the prison system after these high-profile scandals? No. The recent story of the Irkutsk pre-trial detention center, where torture and rape were revealed, confirms once again that all these cases represent an established practice over the years.

In April 2020, a riot broke out at Angarsk penitentiary colony No. 15, but it was brutally suppressed by special forces. Dozens of prisoners were taken to SIZO-6 in Irkutsk. There, other detainees cooperating with the administration tortured them. They raped them and demanded that they testify against the organizers and participants of the riot. This is the story of Yevgeny Yurchenko, who spoke to human rights activists after his release about this torture: “They tied my hand to a coat hanger and attached a rag to my genitals. They sprayed the rag with water so there would be no burn marks.” Journalist Viktoria Ivleva traveled to Irkutsk with human rights activists and met with one of the detainees who suffered similar torture. Here is what he told her:

“I was stripped naked, taken to the toilet, had my hair and eyebrows shaved. Several times I was put in a dress, a wig was made of yarn and tied to my head with a twisted rope: this is how I came out, bent over, for the morning check-up - the doctors and the staff of the special unit saw this, and nobody reacted. The dress was a gray T-shirt that was too big, I had no pants, over the dress they put a top that was supposed to be a bra, with cardboard glasses instead of breasts, they also put makeup on me and painted my cheeks pink. I was forced to go to the bathroom like the girls, saying: you’re not going to turn on your faucet, you’re going to pee, so do it sitting down. I was forced to shove a tightly rolled paper, sealed in a cellophane bag, up my anus…”

When asked by a reporter why he did not complain, the prisoner explained, “Complain? To whom? Everyone knew everything, our screams could be heard on two floors”. This prisoner was recognized as a victim in a case of torture at the Irkutsk SIZO-6, which is currently under investigation by the Investigative Committee of Russia.

Will the publication of the “Ossechkin archives” lead to the end of torture in the Russian prison system and the resignation of Alexander Kalashnikov, director of the FSIN?

My prognosis on the development of events is pessimistic. Suffice it to say that Aleksander Kalashnikov was the head of the FSB in Krasnoyarsk from 2017 to 2019, before taking up his new post in Moscow. And the current deputy director of the FSIN’s operational department, Anton Efarkin, worked in the operational department of Krasnoyarsk’s prison colony No. 17, which is known for its torture practices. It is Anton Efarkin who has just been appointed by Kalashnikov to conduct an investigation into torture at the Saratov prison hospital, which is featured in Vladimir Ossechkin’s video archive.

Moreover, one should not forget that all human rights organizations fighting against torture in Russia are now declared “foreign agents”, which means that they are perceived as enemies by the Russian authorities. As for society, it is apathetic and depressed. The Russian Orthodox Church is also silent; Patriarch Kirill has never spoken out about the torture practices in Russian prisons. This is particularly striking when one remembers the behavior of the Georgian patriarch, who, after the publication of videos of torture in Georgian prisons, brought thousands of people to the streets of Georgian cities.

The “liquidation” of Memorial by the so-called Russian “justice” is an attack on the universal conscience.